Astron Sector lies rimward of the Zhodani Consulate, on the very spinward edge of explored space.

Astron Sector is a largely unpopulated wilderness lying on the far spinward edge of Charted Space.

A basic map showing the distribution and size of stars within Astron Sector. 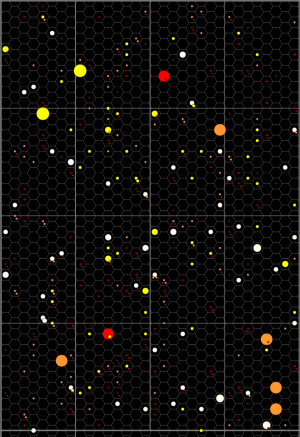 The Three Sisters are a group of distinctive orange giant stars that can be seen across the sector. 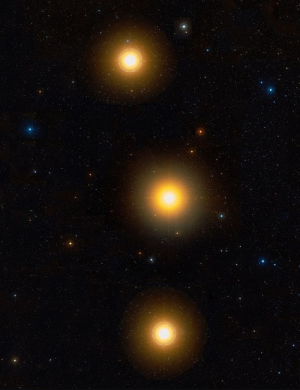 The rimward skies of Astron Sector are dominated by the Borealis Group, a very large cluster of stars containing an unusually high number of giant stars. 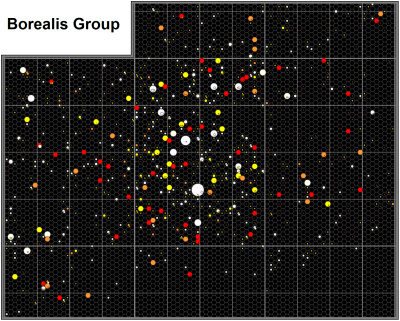 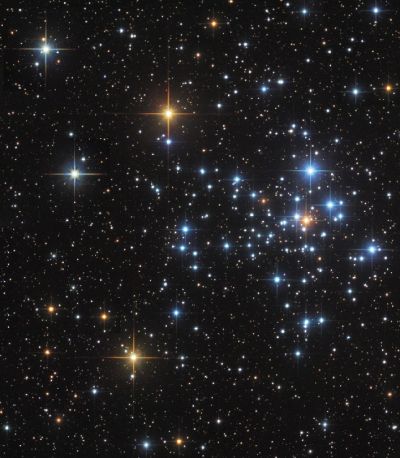 The skies within the region are spectacular. Some of the brighter stars can be seen from the surfaces of worlds during daylight hours.

They are surrounded by more than sixty other giant and subgiant stars, some almost as bright as the named giants, as well as numerous main sequence stars and white dwarfs. 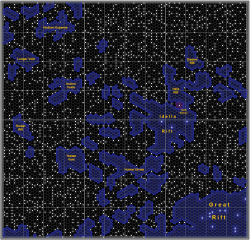 Large rift areas are very much characteristic of Astron Sector, running generally from the spinward-coreward corner of the sector towards rimward-trailing, and dividing it into a scattered coreward expanse of voids and systems, a narrow central "waist" of worlds hemmed in by rifts, and a broad open rimward edge.

These scattered rift regions are considered to be part of the Idella Rift. 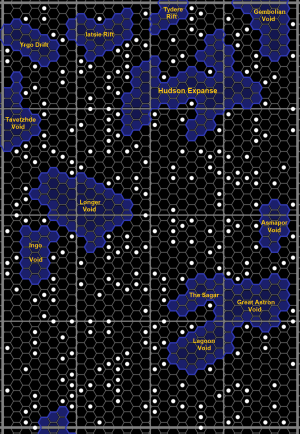 The various rift regions within the sector have been named.

There are a number of traces, drifts, and clusters within the sector. Most are not named. Named regions include:

The Korsumug Main, the great chain of Jump-1 systems linking Astron Sector, Theta Borealis Sector, and Mavuzog Sector, has its coreward terminus just within the sector.

A simple chart showing Mavuzog Sector, Theta Borealis Sector, the rimward edge of Astron Sector, and the Korsumug Main running between them. 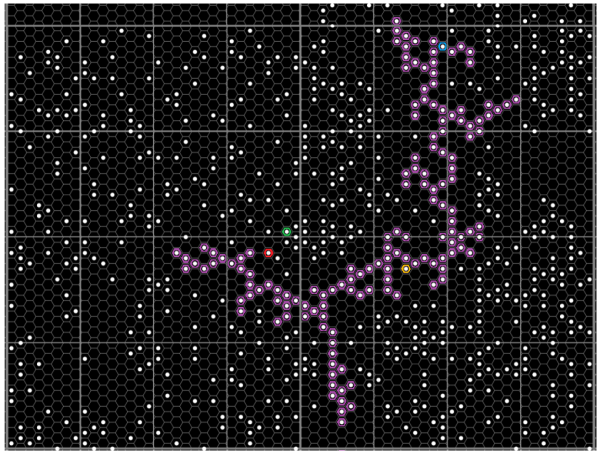 Astron Sector is a mostly unpopulated and largely undeveloped wilderness. Many worlds within the region have never had an intelligent being visit them. 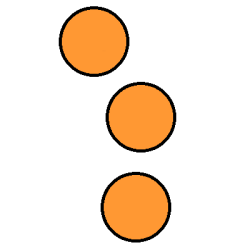 Three vertical, slightly offset orange circles are commonly used as a symbol to represent the sector.

Not all species perceive color in the same way as humans: an alternative monochrome version, with black circles on a white background, may be used instead.

Nine sophont species are native to the sector:

The known population of Astron Sector is approximately 3.784 billion.

The earliest activity in the sector seems to correspond to the Ancients era, between 300,000 and 250,000 years ago. During this time Chirpers were transplanted onto Surgian, the homeworld of the Pumiai, presumably by the Ancients. The reasons for this are not clear. No other evidence of Ancients activity is known to exist within the sector.

The Zhodani discovered jump drives in -5415 but there is no indication that they were ever active within Astron Sector. It seems likely, given Zhdant's relative proximity to the region, that at least a few Zhodani vessels did travel among its stars, but they have left no tangible traces. Even now Zhodani activity within the sector is minimal.

As far as is known, the next interstellar visitors to the region were humans of Terran extraction. These hardy souls had pushed up through the Vilani First Imperium, past the emergent Vargr and across the narrow corridor of stars bridging the Great Rift, and into the vast unexplored territories "Behind the Claw". By the -1900s they had crossed the sector and continued their journey to spinward: settlements and discoveries from the era are known in Mavuzog Sector. For the most part they left few traces behind them, although the Wuaye of Ingo are believed to be descended from the survivors of a crashed Terran ship dating to that time.

Eniri Hudson, a colorful human explorer of the era, is the first named individual associated with the sector. He has lent his name to the Hudson Expanse, a major astrographic feature within coreward part of the region. Hudson kept extensive notes and records of his travels that later provided valuable data for the Imperial First Survey.

In the Year 0 the Third Imperium was founded and over its first few centuries it expanded to spinward. From the 100s onward, small groups of Imperial humans began to move through the region, spreading their technology and use of jump drives. None of this new wave of humans appear to have settled within the sector: like their Terran predecessors they instead continued further to spinward.

The resurgent Korsumug Empire began large-scale raiding along the Korsumug Main during the 500s, including occasional forays into the Sector. Although there was little for them to ravage and despoil, the Jaibok are known to have taken captives from among the Ichachi, the Spatharo, and the Pumiai. The Empire continues raiding into the present day.

During the early 800s a reclusive religious group from the Spinward Marches with a few thousand adherents chose to depart the Imperium, citing "persecution" as its reason for leaving. The faithful assembled a small flotilla of starships carrying everything they felt they needed and set out to spinward. They disappeared travelling between Beyond Sector and the Vanguard Reaches. Although their fate remains officially unknown there are stories indicating that they ultimately settled a few worlds along the coreward edge of Astron sector. This group may be responsible for the "Obunemias Signal".

From 995 to 1065 the Imperial Second Survey was conducted. Astron Sector was included in this grand work and a much more detailed picture of the region was built up, though a great deal still remains unknown. Almost all of the data was gathered via remote observation and from careful collation of scattered records, though a few brave scout personnel operating out of Pautho in Theta Borealis Sector, undertook perilous long-range survey missions to fill in gaps in the information.

The Trooles Confederation, a relatively young state lying on the coreward edge of Theta Borealis Sector, came into being in order to counter increasing Jaibok aggression against its member worlds. Its navy patrols the coreward end of the Korsumug Main and a dedicated force – the Astron Frontier Patrol – dispatches flotillas to hunt down rogue Jaibok within Vilian Subsector and further beyond. 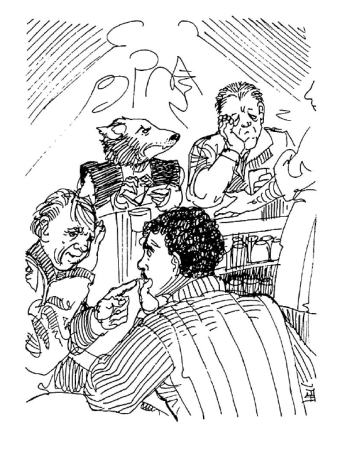 Old Spacer's Tales are rumors, tall tales, hearsay, and gossip that may be heard about Astron Sector.

1. Terrible Disease.
The atmospheres (or surface materials) of many worlds in the sector supposedly harbor a virulent disease. It is a microorganism that can be inhaled or ingested (depending on the version of the story being told), and was spread from world to world by some long forgotten plague-bearer as they traversed the sector. It can survive extremely hostile conditions and lies dormant until awakened by the presence of a potential host. The disease is able to closely mimic the host organism's own biological composition and processes, making it almost impossible to treat. It causes the victim to erupt in unsightly sores and lesions and waste away, ultimately leading to death as a result of massive systemic organ failure. There is only one known cure.

2. Reclusive Communities
A dispersed religious group of Imperial origin inhabit distant parts of Astron sector. They fled persecution centuries ago and travelled far to spinward, or so the tales have it, and now live in isolated hidden communities along its coreward edge, among the rifts and voids of the Hudson Expanse. They are awaiting an event known as the Great Awakening.

Refugees have fled the Jaibok-infested sectors to rimward. Some may have made a fresh start within the pristine wildernesses of Astron sector.

3. Hudson's Horde
Eniri Hudson was a citizen of the Rule of Man who explored the coreward regions of the sector nearly three millennia ago, visiting many worlds and collecting the natural treasures and strange artifacts that he discovered. His vast trove of precious metals, rare gemstones, and valuable natural resources is said to be hidden on an unnamed world somewhere on the Outer Loop, the great ring of systems surrounding the Hudson Expanse.

4. Swordies
Individuals are acting in an official but clandestine capacity, quietly gathering intel and scouring data archives in the ports and communities of the region. Their equipment is strange: odd designs not like the standard gear you get out this Far Along, and they use an unusual non-Riftian alphabet too. For certain they're Sword-Worlders! Sure, they'd pass as citizens of some other random minor polity to most folks but they have little telltales, specific habits and giveaways and turns of phrase that belie their true origins to those who know.

5. Hidden Jaibok
Rumor has it that the Jaibok, or rather the Imperial Korsumug Navy under the guidance of Jansa intelligence officers, have established a secret base somewhere within Astron Sector. It is supposedly a repair and resupply facility for raiders just off of the Korsumug Main, an intelligence-gathering facility operated by Jansa agents and looking rimward, or a jumping off point for a massive invasion into the coreward edge of the Trooles Confederation.

6. Uncharted Anomaly.
Somewhere, deep within the sector, is a previously uncharted space-time anomaly. All the best versions of the story describe it as a "Jump Deep" region that warps jump physics and increases the amount of time that a vessel spends within jumpspace. 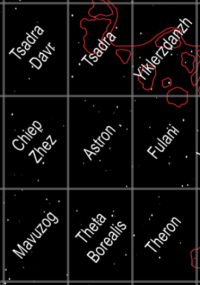 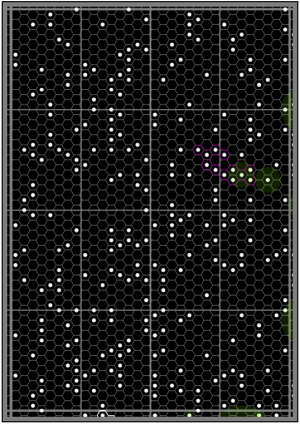 The vast majority of the sector is made up of Non-aligned, Unclaimed systems.

The Haddox Association, lying within Vantor Subsector and Haddox Subsector, is the only extant polity within the sector.

A few systems within the sector are controlled by native sophont species and are designated as Non-aligned, Sophont Dominated.

One system within the sector (Ingo) is designated as Non-aligned, Human Dominated.

There are few political interests within Astron Sector. The Trooles Confederation sends naval vessels to patrol parts of its far rimward subsectors in order to eradicate rogue Jaibok. Occasionally Jaibok raiders of the Imperial Korsumug Navy slip inside its borders, intent on gaining glory, resources, and captives. A few hardy pioneers and settlers push out into the wilderness, keen to explore new worlds and exploit their natural treasures. Very rarely, Zhodani scouts or trade missions wander down from coreward, seeking to expand that states influence and make a handsome profit.

The Trooles Confederation, a polity of Theta Borealis Sector, sends its navy to patrol systems lying in the rimward parts of the sector.

Far-flung Jaibok raiders, elements of the Imperial Korsumug Navy, occasionally venture into the very rimward parts of the sector. 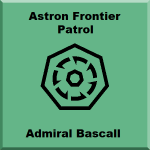 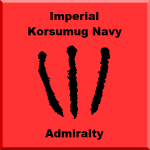 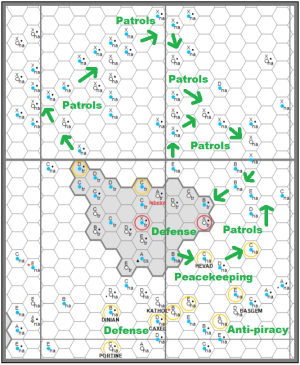 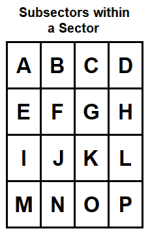 This list of sources was used by the Traveller Wiki Editorial Team and individual contributors to compose this article. Copyrighted material is used under license from Far Future Enterprises or by permission of the author. The page history lists all of the contributions.
Retrieved from "http://wiki.travellerrpg.com/index.php?title=Astron_Sector&oldid=701486"
Categories:
Hidden category: