The Vilani of Vland (Vland 1717) are a technologically advanced Major Human Race with a humanoid appearance.

Biology: Human Major Race (Homo sapiens vlandensis) that developed on Vland (Vland 1717) from human stock placed there by the Ancients.

The Vilani gene pool is much less variegated than that of Terrans although thanks to the size of the Ziru Sirka, and the intermixing of human gene pools, considerable variation exists in physical appearance.

General Appearance: Vilani Humans, on average, stand 1.75 meters in height and weigh about 75 kilograms. Descended from omnivore/gatherers, Vilani humans developed intelligence in response to shifting climatological factors and the inhospitable environment of Vland.

Vilani have a strong tendency to have a tanned skin tone as Vland has a bright type-F Star, brownish shades of hair, hazel eyes, and an uncommonly high prevalence of golden eyes.

Inhospitable Vland: The homeworld of the Vilani, Vland, while possessed of a environment, for the most part, amenable to Human life, boasted an alien ecology based on its own independently evolved biology, a biology that produced amino acids, proteins, and sugars that were difficult for humans to digest and metabolize. The humans just could not use local plant and animal life for food. Vland was inhospitable in its own way.

Shugilii: One of the oldest occupations in Vilani society is that of Shugilii (Anglic: Shugilii) (which translates roughly as miller). The Shugilii was a person who could transform raw food into edible food through special aging and chemical treatments. The Shugilii position was more akin to that of shaman or witch doctor than that of a cook. Since virtually no food on Vland was edible without some treatment, Shugilii were powerful members of society.

Beginning in prehistoric times, the Shugilii caste developed (and hoarded) safe methods for food preparation. With advanced technology and interstellar trade the need for these secret techniques declined, but the Shugilii retained a role as guardians of tradition, the closest thing Vilani society has to a priestly caste.

Vilani Medicine: The intense alien nature of the land was reciprocal: humans were unsuitable as food for predators, parasites died because humans provided no nutrition, bacteria could not infect the human system, and even viruses were unable to invade and take over human cells.

Consequently, the primitive human society found no need for medically-oriented shaman. Vilani medical understanding was very slow to develop because of this.

This species developed intelligence in response to interspecies competition and the basic inhospitability of their world to baseline human biochemistry.

Members of Humaniti use the following IISS code:

Sophontologists studying this species have discovered the following data.

Humans have a conventional carbon-water based biochemistry.

Humans are primarily a diurnal species and are active by daylight and rest during the night.

This species survives using the following methods of consumption:

Due to the basic inhospitability of the Vilani homeworld, the Vilani have developed increased gastric fortitude and are accustomed to highly processed and rendered foods through a variety of methods including:

Vilani Trophics: The Vilani are evolved from omnivore/gatherers as are other Humans, and will eat a wide variety of foodstuffs, whether of animal, plant, or other origin.

Due to the cultural legacies of the Shugilii and the inhospitable environment of Vland , the Vilani prefer processed foods, including those made through fermentation, pickling, salting, chemical treatment, etc..

This same legacy leads most Vilani avoid raw, organic foods of any type including fruits, nuts, vegetables, and unprocessed meat. To most Vilani, the Vilani folk saying holds: "If it isn't cooked, it isn't food!"

Some favorite Vilani foods and dishes include:

Humans have the following reproductive characteristics::

The average human lifespan is now well over one hundred years in span and many live longer than that. In addition the technology of anagathics (life extension) is rapidly growing in usage although it is still prohibitively expensive to the masses.

Humans are an iteroparous species and typically bear one child per pregnancy, which requires well over a decade to be educated and come to reproductive maturity.

Larger litters of offspring are possible, but much less common.

Currently, Vilani is a cultural rather than racial or national labeling, and it is applied to those within the Imperium who retain some of the old ways.

Dialects of the old High Vilani language survive in certain places, along with a few other fragments of Vilani culture, such as musical forms and other fine arts.

Certain of the old Vilani noble families have maintained more of the old culture. In particular, those who control the Vilani megacorporations instill a predominantly Vilani culture on many of their employees.

Early Vilani society was dominated by three groups (Bureaux) or Shangarim: the Shugilii, the Aristocrats, and the Merchants.

Each of the three social groups organized themselves into government bureaus, but each bureau, actually more of a megacorporation in practice, was essentially an independent government within their controlled territories.

With the flowering of Vilani society (circa −11,000) and its attendant industrial revolution, each of these three forces gained power rather than lost it; each participated in the creation of the industrialized wealth of Vland.

Vilani Legend: Vilani legends are full of accounts of the wars of the gods, terrible destruction, and occasional intervention in human affairs by the gods. Legends exist of early explorers who found lands with great living stone-metal gods possessed of immense magical powers. Modern archaeologists now believe these "gods" were actually great robot warriors and juggernauts used by the ancients in the Final War. Apparently, the last of these machines finally ran down around −20,000.

The Vilani discovered intelligent lifeforms on other worlds within 60 parsecs of Vland. None of the races had progressed enough to have begun interstellar travel. The Vilani found it easy to dominate these less technically advanced races. The Vilani were able to impose Vilani culture and law on these other races among the stars. However, the Vilani conquering was not of a militaristic nature, but was economic subjugation.

As their sphere of influence was expanding, the Vilani found it difficult to maintain control across such great distances with jump-1 their maximum rate of travel and communication. At the same time, each of the three power classes of the Vilani society found themselves threatened by the forces around it.

Three bureaux were established, Sharurshid, Makhidkarun, and Naasirka, each independent of the other two, and each assigned a territory among the stars for which it was responsible. Each of the three bureaux was effectively identical, but they initially espoused different philosophies, which were based on their origins. The bureaux maintained their own governments within their territories.

Beginning in −5400, a series of wars to subjugate the resisting fringe cultures was waged. This period of consolidation lasted until −4045. 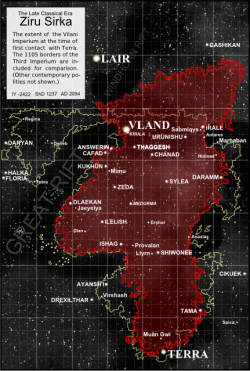 In −4045, the ruling Vilani council, the Igsiirdi (Anglic: Igsiirdi), declared the Grand Empire of Stars, or in the Vilani tongue the Ziru Sirka. The Vilani calendar starts on this date.

At first, the Empire had no emperor. Within 10 years, the chairman of the Isgiirdi (elected for life by the council) was declared the Ishimkarun (Anglic: Ishimkarun), the Shadow Emperor, who ruled by published proclamation, but never appeared in public.

In −3610, the Shadow Emperor became Emperor of the Stars, who was absolute monarch of the Empire. Successors were elected from the Igsiirdi upon the death of the old emperor.

For nearly 1,200 years the Grand Empire of Stars kept peace among its star spanning population. However, the empire insisted on cultural rigidity.

Exploration was brought to a halt by −4000. Scientific research was controlled and then stopped altogether by −3000.

The beginning of the end of Vilani domination, however, was emphasized when the Terrans contacted the empire in −2422.

These are some of the more important historical events that have affected this polity:

Vilani in present times are citizens of the Third Imperium. However, the Vilani of the past were the founders and members of the First Imperium or Ziru Sirka.

The Ziru Sirka was known for maintaining massive armies and enormous battlefleets to enforce its authority. Now, the once mighty Vilani military has, for the most part, been subjugated into the Third Imperium's military.

Vland began tightening its control of its trade sphere, and finally organizing it into a centralized state in −5273. This marked the beginnings of the First Imperium, although there was as yet no emperor. During the thousand year period of the Consolidation Wars, Vland conquered and absorbed its enemies until there were no longer any civilized states on its borders (except for a portion of the Vargr Extents, isolated from the Imperium by the Windhorn rift).

The last war ended in −4045, and the Vilani declared the establishment of an interstellar empire to govern all Vilani territory. Known as the Grand Empire of Stars or Ziru Sirka, Vilani dating begins at this point. With no exterior threats, the Ziru Sirka lasted for nearly 1800 years; at its height, which was attained soon after the end of the wars, the First Imperium contained 27 sectors and over 15,000 worlds.

The Vilani calendar has its basis in the depths of antiquity; its units were dictated by the period and rotation of Vland (the Vilani homeworld) around Urakkalan, its star.

Vilani dates count from the year of the Establishment of the First Imperium (the Vilani Imperium). Those before are suffixed PI (Pre-Imperium); those after are suffixed VI (Vilani Imperium). There is no year zero. Vilani years are approximately 1.33 standard years in length (496 days). Vilani years are further subdivided into seasons, months, and weeks.

In −9235 the Vilani made their ultimate breakthrough, one that would assure their ascendance for the next 6000 years. A research team working on the fringes of the Vland system created the first working prototype jump drive and demonstrated its effects.

In −5430, the Vilani finally discovered jump-2. No other race had jump-2, and the Vilani maintained its monopoly on jump-2 by jealously guarding its secrets from all subject races.

Vilani merchants and traders are well-known throughout Imperial space and beyond.

This list of sources was used by the Traveller Wiki Editorial Team and individual contributors to compose this article. Copyrighted material is used under license from Far Future Enterprises or by permission of the author. The page history lists all of the contributions.
Retrieved from "http://wiki.travellerrpg.com/index.php?title=Vilani&oldid=691343"
Categories: