The Vilani (language) is primarily used by the Vilani race throughout the Third Imperium supra-polity.

Vilani is an ergative, agglutinative language, with bound morphemes on the verb indicating case and aspects of the agent, patient, and object. Some analytic features, typically inherited from Old High Vilani, include helper words indicating mood. There are also some synthetic/fusional features, inherited from Archaic Vilani.

The language is basically head-initial and right-branching. There are two basic sentence types: transitive and intransitive. Transitive sentences consist of a Verb, an Agent which performs the action of the verb, a Patient which is the recipient of the action, and an optional dative or benefactive Object (for use with things like prepositional phrases). Intransitive sentences consist of a Verb, a Subject to which the verb applies, and the optional dative or benefactive Object as mentioned above. In both cases, the verb contains much of the information regarding the relationship between the subject and objects of the sentence.

Morphology is the study of the internal structure of words.

Phonology, the study of the sound systems of a language.

Grammar is the structure of a language.

Syntax is the study of how words combine to form grammatical sentences.

ka: flag indicating the start of a dative or benefactive object phrase.

ki-: it is being eaten

-k-: he/she is doing the eating

-gim: Eneri is the agent, performing the action

-ni: ‘in, at, on’ prepositional marker

ka: flag indicating the start of a dative or benefactive object phrase. 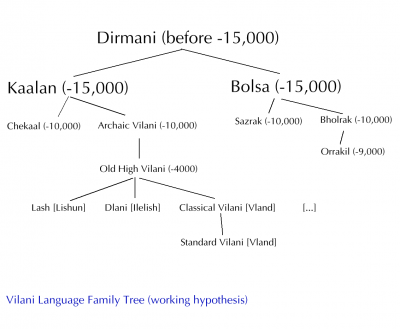 A lexicon is the word supply of a language.

Semantics is the study of the meaning of words (lexical semantics), and how these combine to form the meanings of sentences.

ki-: done by an inanimate thing

A. Liraamgim leskhugash. An air/raft hit (the person in question).

Pragmatics is the study of how language is used by its speakers.

Historical Linguistics: Archaic Vilani became a major language of Vland long before the Vilani began interstellar travel. The language developed as the Vilani consolidated their holdings into the First Imperium, and the language adapted to some degree to non-humans as well.

Archaic Vilani (A.V.) was an inflected language, meaning it used one inflection on the verb to convey case, tense, aspect, and mood. A.V. used a prefix inflection. Vast tables catalogued this often convoluted and complicated prefix. The literary form of A.V. often differed greatly from that commonly spoken.

Over a thousand years, literary A.V. became increasingly relegated to the court scribes, as Vland was reaching for the stars. Possessed by a grand sense of purpose, grammarians in the Ziru Sirka codified the spoken form of the language, removing or absorbing grammatical differences into the language of the First Imperium. Common helper words were elevated to replace most of the old inflections, completing the evolution to Old High Vilani. This language in many ways resembles the current "Khal" trade cants.

Bureaux formal language continued to evolve, gradually setting the specific order of helper clitics, then eroding them and sticking them to the verb, resulting in Standard Vilani (S.V.). S.V. today is the formal commercial language of the Vilani worlds and megacorporations. In the Third Imperium, its status is second only to Anglic.

All dates are 3rd Imperium baseline

Khal is a "Trade Vilani" language dialect. It represents a holdover of the trade cants based on Old High Vilani, borrowing heavily from Standard Vilani's vocabulary.

Khal is typically Subject - Verb - Object, with ways to change the order for emphasis.

Verbs sometimes use a suffix to inflect for tense, aspect, and mood.

This language is primarily in use in the following areas:
Charted Space:

The homeworld of this language is:

This language is known to be in use on the following systems and worlds:

No world articles for Vilani (language)

This list of sources was used by the Traveller Wiki Editorial Team and individual contributors to compose this article. Copyrighted material is used under license from Far Future Enterprises or by permission of the author. The page history lists all of the contributions.
Retrieved from "http://wiki.travellerrpg.com/index.php?title=Vilani_(language)&oldid=691247"
Categories:
Hidden category: