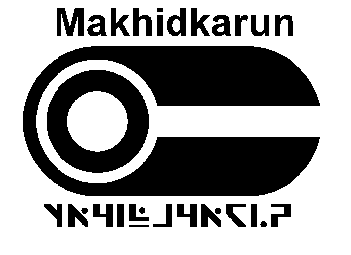 Makhidkarun originated with the aristocracy or Enshii and emphasized interstellar government.

Makhidkarun is one of the thirteen Imperial MegaCorporations in operation in 1116.

Notes: Makhidkarun specializes in the communications and entertainment industries. The firm produces fine musical recordings of all types, two and three dimensional motion pictures, books, magazines, and art reproductions of all sorts. Its communications division produces a wide variety of data processing, storage, and retrieval equipment and the requisite software for it. A gourmet foods division trades in all manner of rare and expensive foods, wines, and delicacies.

This old Vilani Megacorporation is not the largest manufacturer of robots, but it is the most innovative. The company's research staff is responsible for many of the Imperium's significant breakthroughs in synaptic processing.

This list of sources was used by the Traveller Wiki Editorial Team and individual contributors to compose this article. Copyrighted material is used under license from Far Future Enterprises or by permission of the author. The page history lists all of the contributions.
Retrieved from "http://wiki.travellerrpg.com/index.php?title=Makhidkarun&oldid=672658"
Categories: