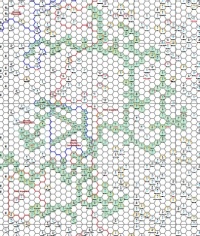 The Spinward Main is an astrographic group of systems in the Spinward Marches Sector, each within jump-1 of another.

The Spinward Main: Meandering throughout the Spinward Marches is an informal trade route called the Spinward Main. This Main is a line (actually several lines, with branches) of worlds each only jump-1 from the next. The result is that long, often profitable trading journeys are possible even for lowly jump-1 ships. From Regina, the Main extends coreward, into the subsector. It also extends spinward, beyond the Imperial borders, ultimately to Querion subsector and the Zhodani Consulate. [1]

The Spinward Main has been popularly divided into several subsections, such as a cul-de-sac branch which enters Regina subsector at Jenghe and extends as far as Efate.

While most of the Main lies within the borders of the Imperium, branches enter the Darrian Confederation and the Sword Worlds Confederation, and some segments traverse neutral space.

The following systems and worlds are located on this astrographic feature:

This list of sources was used by the Traveller Wiki Editorial Team and individual contributors to compose this article. Copyrighted material is used under license from Far Future Enterprises or by permission of the author. The page history lists all of the contributions.
Retrieved from "http://wiki.travellerrpg.com/index.php?title=Spinward_Main&oldid=609571"
Categories: