The Domain of Deneb is one of the domains of the Imperium.

The domain is about 30% void due to the Great Rift, and bordered coreward by the Vargr Extents and spinward by the Zhodani Consulate.

This domain was the most recently created (589[1]) and awarded (1117[2]). In the gap between creation (589) and award (1114) the title Archduke was not awarded, and the position itself lay vacant. In the absence of a person, there nonetheless arose a bureaucracy to administer essential administrative services, headquartered at Deneb. That bureaucracy wielded great power within its specific administrative offices.

The following archdukes have administered this domain throughout the history of the Third Imperium: 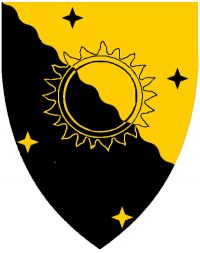 The following defines the Heraldry of the Domain Of Deneb:

The shape of section of the Great Rift passing through this section of Imperial territory in Deneb and parts of Vland, appears like a talon, or Claw, giving rise to the nickname "The Claw" to this part of the rift and giving rise to term "Behind the Claw" when referring to these regions of the Imperium.

This domain encompasses locations from the following sectors:

This list of sources was used by the Traveller Wiki Editorial Team and individual contributors to compose this article. Copyrighted material is used under license from Far Future Enterprises or by permission of the author. The page history lists all of the contributions.
Retrieved from "http://wiki.travellerrpg.com/index.php?title=Domain_of_Deneb&oldid=622333"
Categories: