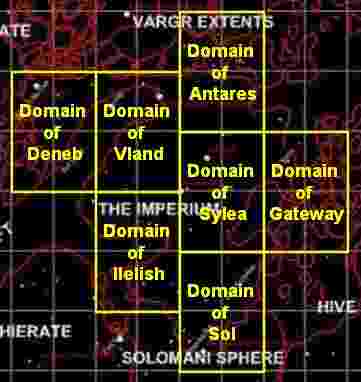 An Imperial Domain is a group of four or so sectors within the Third Imperium.

Imperial Domains: The Domains are listed below in order of creation.

Domains of the Third Imperium[edit]

6. Domain of Sol (originally the Domain of Diaspora) (Dark Red)

* Although technically a part of a domain, these sectors are outside of the Imperium.

† Although these sectors are not within the bounds of any domain, their Imperial portions are administered by the indicated domain.

During the Pacification Campaigns, Emperor Artemsus divided space into six regions, labeled them domains, and appointed an archduke over each of them. To each archduke, he assigned the continuing pacification of the domain’s many systems and their integration into the Imperium.

In 589, during the First Frontier War, a seventh domain was established-Deneb (Spinward Marches, Deneb, Trojan Reach, Reft) The intent was to appoint an archduke to be responsible for its supervision. However, the Civil War broke out before an archduke was appointed.

Following the civil war, the emperors expressed concern about individuals with powers equaling their own, so they moved to lessen the power of the archdukes in the Imperial government. Because of this, the domains came to have little practical significance, and no archduke of Deneb was ever appointed. Each archduke did retain the power to create knights and baronets.

In the years after the Fourth Frontier War, and after the problems it presented from lags in communication, Emperor Strephon felt a strengthened archduke position could enable the Imperium to more quickly respond in defending the realm. Against the protests and opposition of some prominent members of the Moot, Strephon reestablished the domain as a level in the bureaucracy of the Imperial Navy, and to the Domain the ability to collect taxes. Still later, Strephon gave the archdukes the ability to legislate and enforce the desires of the emperor on the local level. Strephon appointed an archduke of the Domain of Deneb: Archduke Norris.

The Ziru Sirka controlled most of Meshan and Mendan sectors, but they are entirely outside the bounds of the Third Imperium.

Gateway and Crucis Margin sectors are entirely outside the bounds of the Imperium and the Ziru Sirka. 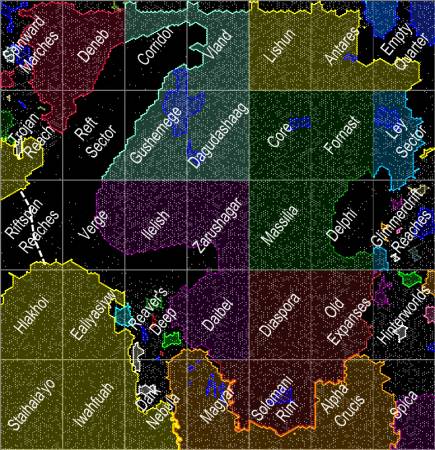 This list of sources was used by the Traveller Wiki Editorial Team and individual contributors to compose this article. Copyrighted material is used under license from Far Future Enterprises or by permission of the author. The page history lists all of the contributions.
Retrieved from "http://wiki.travellerrpg.com/index.php?title=Domain&oldid=678593"
Categories: