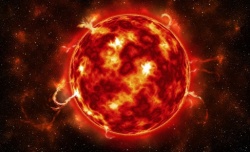 A Flare Star is a star or stellar object of variable magnitude, throwing off energy (...emitting stellar radiation) at different strengths.

The majority of flare stars are otherwise normal red main sequence stars that exhibit unusually violent flare activity. The star increases in brightness by up to two magnitudes (...six times brighter) in just a few seconds, and then fades back to its normal brightness in half an hour or less. This change in brightness is caused by the eruption of very large flares from the corona associated with magnetic disturbances in the stellar atmosphere. During a flare event radiation is emitted across virtually the entire EM spectrum. 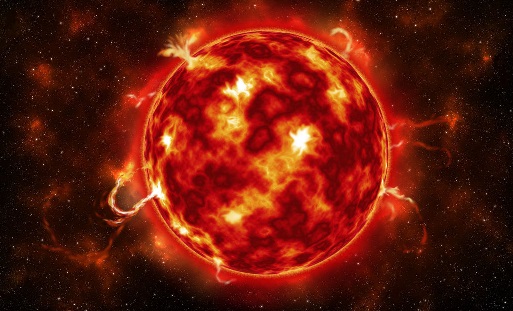 Flares occur sporadically, with successive flares spaced anywhere from an hour to a few days apart. A flare reaches peak brightness very quickly and more than one flare can occur at a time. Flare stars may periodically experience flare storms, during which the frequency and violence of flare activity dramatically increases.

The total energy released in the form of flares can be extreme, exponentially more powerful than the energy released by flare activity from more stable stars such as Sol.

More massive stars are also known to display violent flare activity, but this is most commonly due to disturbances in their magnetic field caused by interactions with binary companions or large, closely orbiting planets such as bigworlds or hot gas giants.

Worlds orbiting a flare star experience particularly large and spectacular aurorae, produced by the massive quantities of charged particles thrown off by the star interacting with the molecules that make up the planets atmosphere.

A flare star may also be called a UV Ceti Star, in reference to one of the earliest examples of a flare star observed by ancient Solomani astronomers.

Proximity to a flare star presents a number of potential dangers.

A flare star is a variable star. This is a type of star whose observed brightness – its apparent magnitude – fluctuates as seen from a remote observatory, typically light years distant. In the case of flare stars this variation is caused by the change in the stars emitted light, which directly relates to flare activity and coronal mass ejections.

Flare stars can be found throughout Charted Space:

This list of sources was used by the Traveller Wiki Editorial Team and individual contributors to compose this article. Copyrighted material is used under license from Far Future Enterprises or by permission of the author. The page history lists all of the contributions.
Retrieved from "http://wiki.travellerrpg.com/index.php?title=Flare_Star&oldid=676167"
Categories: