The Wulf-class Free Trader is a civilian merchant.

The Wulf class Free Trader is a generic civilian vessel: it is a small commercial transport commonly encountered within the Distant Fringe region. It is classified as a Commercial Vessel and is constructed as a conventional design. Similar designs have been in use from the time the Distant Fringe was first settled.

The Wulf class is a streamlined, flattened ovoid cone with a mean width of 15 meters, a mean height of 9 meters, and a length of around 49 meters: a small superstructure with a height of 3 meters sits on the top of the vessel. The ship has a total enclosed volume of approximately 2,700 cubic meters. There are three decks: a superstructure deck containing passenger cabins, a split main deck with the forward section housing the bridge and the crew cabins and the aft section containing the upper cargo hold, and a lower deck given over to the main cargo hold and the low berths. The engineering section is located aft and the fuel tanks wrap around the stern. The avionics bay is spacious and can easily be accessed. 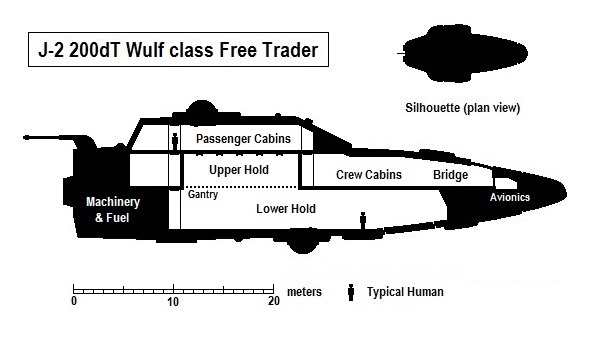 The Wulf class is a design that dates to the time of the Terran Confederation. It is representative and a large number of variants exist, particularly with regard to the allotted weapons systems, onboard electronics, and the fit out of internal spaces.

A number of companies manufacture ships equivalent to the Wulf class. They vary in hull shape and internal layout but all share the same basic design and all have very similar capabilities and performance characteristics.

Each variant class is named by the company that produces it: these organizations generally draw on traditional naming protocols. It is not uncommon for a historical class name to be reused.

Individual vessels within a class are issued specific serial numbers and transponder codes but traditionally are named by their owners. This is considered a serious affair and a ship with a frivolous name is considered "unlucky".

This list of sources was used by the Traveller Wiki Editorial Team and individual contributors to compose this article. Copyrighted material is used under license from Far Future Enterprises or by permission of the author. The page history lists all of the contributions.
Retrieved from "http://wiki.travellerrpg.com/index.php?title=Wulf_class_Free_Trader&oldid=688236"
Categories: