The Codori Prime class Luxury Liner is a passenger starship.

The Codori Prime class is an extremely well appointed design of small luxury passenger liner, with some limited ability to conduct cargo service. Corporate executives and their Fives friends often use these vessels for excursions and business trips, effectively turning them into private Yachts for the duration of the charter. Examples of the Codori Prime class are occasionally encountered along Star Lanes within the Distant Fringe region, often travelling in the company of commercial escort vessels of a paramilitary nature.

The Codori Prime class Liner is a two part hull, with the aft section consisting of a streamlined disk with a diameter of around 35 meters and a forward flattened wedge-shaped section with a length of approximately 15 meters, joined by a 5 meter neck. Some elements of the hull are narrower and some are wider, giving the vessel a total enclosed volume of approximately 10,800 cubic meters.

Fuel Tanks occupy the central and rear sections of the ship. The cargo hold includes the cryogenic (low berth) section. Working sections of the vessel such as the machine shop, the galley and general crew quarters are located aft. Senior officers are accommodated forward, close to the bridge, while stewards have rooms close to passenger cabins. Middle passage accommodations are found in the less desirable midsection of the vessel while first class cabins are located on the outer edges of the disk and have windows. 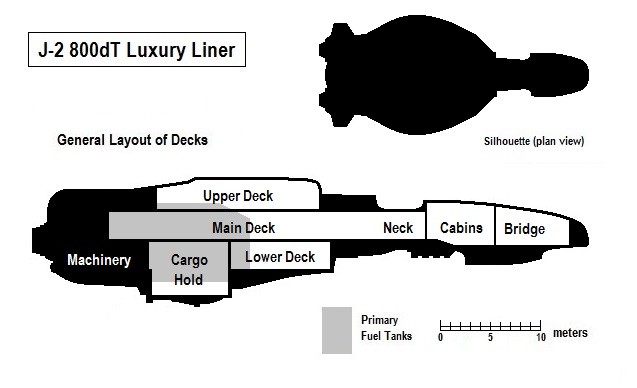 The Codori Prime class is classified as a Luxury Liner and is known for the sumptuousness of its internal fittings. These are bespoke and unique, created by celebrated designers, made to the very highest quality by skilled craftsmen and manufactured from rare and exotic materials. Crew members are specially chosen for their skills and winning personalities and always include a qualified doctor and a gourmet chef.

The hull shares many design features and structural elements with the slightly smaller Palatine class Merchant Trader. While the Palatine is aerodynamic and sleek, the Codori has enough additional nacelles, protrusions, and bulky structure to affect its aerodynamic performance and qualify it as a Close Structure configuration.

The Codori Prime class is broadly representative of vessels of its type. It offers good protection against a range of potential threats: it is equipped with eight military grade triple turrets with full fire control.

A number of companies manufacture ships equivalent to the Codori Prime class. They vary in hull shape and internal layout but all share the same basic design and all have very similar capabilities and performance characteristics.

This list of sources was used by the Traveller Wiki Editorial Team and individual contributors to compose this article. Copyrighted material is used under license from Far Future Enterprises or by permission of the author. The page history lists all of the contributions.
Retrieved from "http://wiki.travellerrpg.com/index.php?title=Codori_Prime_class_Luxury_Liner&oldid=593321"
Categories: