The Cruise Liner is a large passenger starship.

The Cruise Liner is a large commercial passenger transport commonly encountered along Star Lanes within the Distant Fringe region. It is classified as a Passenger Liner and is constructed as a conventional design. Similar designs have been in use from the time the Distant Fringe was first settled.

The Olympian class is a streamlined flattened cone with a mean diameter of 32 meters and a length of around 170 meters. Some sections are narrower and some are wider, giving it a total enclosed volume of approximately 135,000 cubic meters.

Fuel tanks wrap around the central and rear sections of the ship. The cargo hold includes the cryogenic (low berth) section. Working sections of the vessel such as the laundry, the galleys and general crew quarters are located aft. Senior officers are accommodated forward, close to the bridge, while stewards have rooms close to passenger cabins. Middle passage accommodations are found in the less desirable midsection of the vessel while first class cabins are traditionally forward, often with windows offering spectacular views. The main commercial strip and leisure facilities are located in the forward core regions and are focused on an open Atrium area. 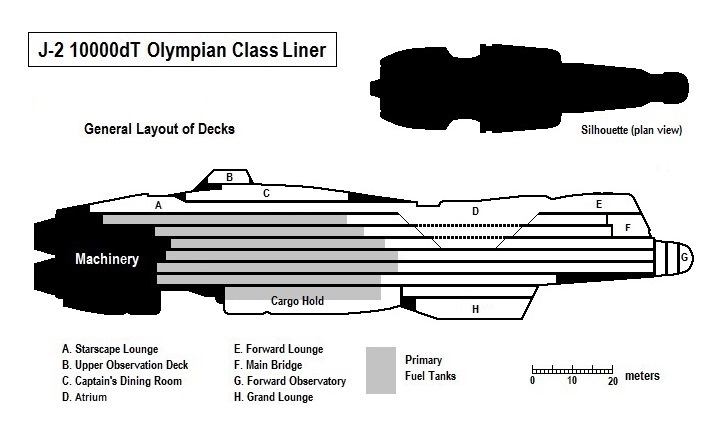 The design is representative and a large number of variants exist, particularly with regard to the allotted weapons systems, onboard electronics, and the fit out of internal spaces. Cruise Liners generally follow predetermined routes, often with extended layovers at locations to allow tourism and sightseeing. Liners of this type have been pressed into service as troop transports during conflicts.

A number of companies manufacture ships equivalent to the Olympian class.

They vary in hull shape and internal layout but all share the same basic design and all have very similar capabilities and performance characteristics: the most notable of these "mirror" designs is the remarkably similar Gaia class Luxury Liner. Gaians and Olympians often directly compete on profitable routes. There is intense rivalry between individual vessels and their crews.

This list of sources was used by the Traveller Wiki Editorial Team and individual contributors to compose this article. Copyrighted material is used under license from Far Future Enterprises or by permission of the author. The page history lists all of the contributions.
Retrieved from "http://wiki.travellerrpg.com/index.php?title=Olympian_class_Cruise_Liner&oldid=598404"
Categories: