The Besouro Valente class Personnel Transport is an Auxiliary.

The Besouro Valente class Transport is a historical design produced in the Terran Confederation during the first half of the 22nd century. Ships of this class fled the Destruction of Terra at the hands of the Vilani Imperium in 2147AD, forming a part of the Last Armada and carrying with them the last remnants of Terran culture and independence. The class were sturdy and reliable – those vessels serving with the Armada endured more than a century of spaceflight.

A Besouro Valente class of the Interstellar Wars period.

The Besouro Valente class is a streamlined flattened cone with a mean height of 28 meters, a mean width of around 60 meters and a length of approximately 107 meters. The hull is relatively irregular and some sections are narrower or wider, giving it a total enclosed volume of approximately 162,000 cubic meters.

Fuel tanks wrap around the central and rear sections of the ship. The cargo hold is located forward and is adjacent to the low berth section. Working sections of the vessel such as the sickbay, the galley, the laundry, and general crew quarters are located on the crew deck: senior officers are accommodated forward, close to the bridge, while stewards have rooms close to passenger areas. Accommodations are located on lower decks. A central liftshaft connects all of the primary decks. The main promenade and leisure facilities are located on the broad forward half of the main deck. The aft section of the main deck is narrow and connects to the engineering control room. Machinery and equipment can be accessed by cramped engineering spaces. 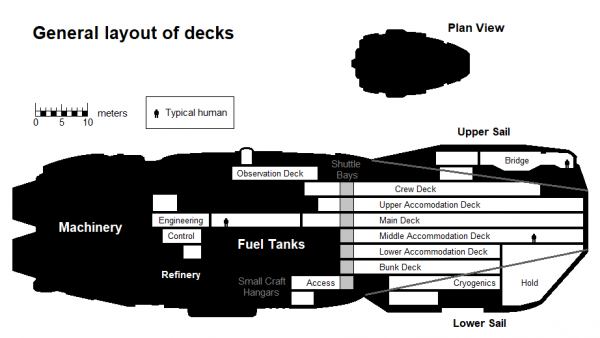 Besouro Valente class Transports were designed as troopships and constructed in large numbers at Terran-controlled shipyards throughout the early Interstellar Wars period. It was an Auxiliary vessel and was one of the more common examples of large ship acquired by the Expedition.

In addition to carrying passengers, some examples of the class also served as recreational venues (in some sources being referred to as "shore leave ships"). Such vessels were almost entirely given over to entertainment and leisure facilities, providing a vital break from the routine of Armada duties. A number of examples were converted to scientific research vessels, with dedicated laboratory facilities, and into specialist hospital ships.

Vessel Peculiarities:The class was always considered chronically underpowered, with serious performance issues in high-G environments. The vessel carried jamming equipment and an ECM package, intended to increase its chances of survival in potentially hostile situations. This was at best a lackluster counter to its very poor maneuver performance, which frequently left it as a slow, lumbering target that was easy prey for enemy combatants.

Class Naming Practice/s: The name Besouro Valente means "Courageous Beetle" in the old Terran language of Portuguese. Its crews often called it something far less heroic: "Beijo da Morte" was one of the more common. [3] Individual vessels were generally named by the building yard, often carrying the names of members of the construction team's families.

Later variants of the class had an upgraded (and substantially larger) maneuver drive, installed at the expense of some personnel accommodations.

This list of sources was used by the Traveller Wiki Editorial Team and individual contributors to compose this article. Copyrighted material is used under license from Far Future Enterprises or by permission of the author. The page history lists all of the contributions.
Retrieved from "http://wiki.travellerrpg.com/index.php?title=Besouro_Valente_class_Personnel_Transport&oldid=598716"
Categories: