The Korsu class is a scouting vessel of the Korsumug Empire.

Information about the Korsu class is hard to come by. It is classified as a fleet scout (Type SF), though it is more commonly defined as a fast scout (also denoted as Type SF). As more information about the type becomes available that designation may change.

Examples of the class serve with the Naval Survey Office of the Immortal Legion Fleet. 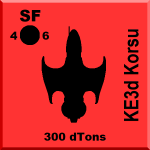 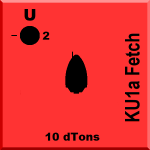 The Korsu class is a long-range reconnaissance vessel with 6-G and J-4 performance. It has a slender hull and distinctive trifoil wings, making it distinctively different to other Jansa-designed ships. The design has sophisticated electronics and is fitted with advanced sensor and communications systems. Typically, the vessel jumps into a system, often many AU beyond the mainworld, accelerating past a target at extremely high speed and performing sensor scans before jumping away. They will always try to avoid combat, jumping clear if necessary. If there is danger of capture, the vessels are fitted with a self-destruct device (a "Thunderball") that can be triggered by the officer in command.

The Korsu class scout is a rarely seen type of ship used by the Korsumug Empire, typically serving in a reconnaissance role for a patrol force or a raiding group. There are no exact records of the number that have been built.

The Korsu class were deliberately made to resemble Mavuzo ships, in order to camouflage them and cause enemies to pause before engaging, which could give them an edge in situations where immediate reactions can mean life or death. They proved to be useful vessels and the design now see widespread use within the Empire and beyond its borders. Only one example is known to have been captured by another interstellar state, after it was struck by a meson weapon and suffered a series of internal explosions that killed the crew before they could initiate the self-destruct. The remnants that were recovered – the vessel was little more than a gutted shell after the meson gun hit – nonetheless provided valuable intel. 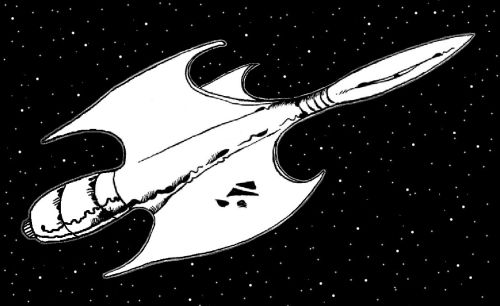 Early low-jump examples of the class were spherical-hulled gunboats that served on the Korsumug Main, where they saw frequent active service and were often used as sensor pickets. The design gradually became used exclusively as a scouting vessel. A number of redesigns with more powerful drives and increasingly slender hull profiles were fielded as the Korsumug Empire began to venture to worlds further from the Main. This ultimately resulted in the long, narrow KE3d variant, fitted with large airfoil surfaces and equipped with a Jump-4 drive.

Examples of the Korsu class can be encountered throughout Mavuzog Sector and Theta Borealis Sector.

Vessel Peculiarities:
Specifications and technical data about the class, particularly details regarding its countermeasures package and sensor and commo jammers, are sought.

Class Naming Practice/s:
Vessels of the Korsumug Empire are given alphanumeric designations and callsigns by other interstellar states. KE refers to Korsumug Empire (a designation applied to all Korsumug combat units), 3 is a multiple of hundreds of tons of displacement and also indicates at a glance the number of weapons mounts, and 'd' refers to the version of the vessel, relating to its construction tech level and bracketing its maximum jump potential. Type codes will often repeat: 'Korsu' is an easy to remember name to identify the specific type of vessel.

This list of sources was used by the Traveller Wiki Editorial Team and individual contributors to compose this article. Copyrighted material is used under license from Far Future Enterprises or by permission of the author. The page history lists all of the contributions.
Retrieved from "http://wiki.travellerrpg.com/index.php?title=KE3d_Korsu_class_Fast_Scout&oldid=665204"
Categories: