The Virtue class Light Freighter is a TL–11 Transport.

The Virtue class is a generic civilian vessel: it is a commercial transport commonly encountered along Star Lanes within the Distant Fringe region. It is classified as a Bulk Cargo Carrier and is constructed as a conventional design. Similar designs have been in use from the time the Distant Fringe was first settled.

The Virtue class is a streamlined flattened cone with a mean width of 26 meters, a mean height of 13 meters, and a length of around 92 meters. The hull is wider in some sections and narrower in others, it has large wings and the rear section has large machinery housings, giving the ship a total enclosed volume of approximately 20,250 cubic meters. There are three forward decks, a large forward cargo hold, four narrow central access decks, a large aft hold, and two rear engineering decks. The bridge, the accommodations and the hangar are located forward, while the cryogenic section and the secure locker are situated in the central access decks. The fuel tanks are contained within the wings and the stern. 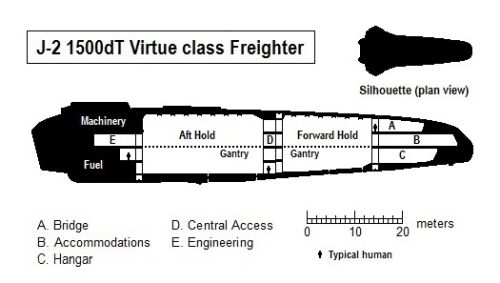 The Virtue class is representative and a large number of variants exist, particularly with regard to the allotted weapons systems, onboard electronics, and the fit out of internal spaces. While they have spacious holds and adequate accommodations, the class are considered underpowered and a number of vessels have suffered catastrophic failure while operating in high-gee environments.

Vessel Peculiarities: No information yet available.

Class Naming Practice/s: A number of companies manufacture ships equivalent to the Virtue class. They vary in hull shape and internal layout but all share the same basic design and all have very similar capabilities and performance characteristics. Each variant class is named by the company that produces it: these organizations generally draw on traditional naming protocols. It is not uncommon for a historical class name to be reused. Individual vessels within a class are issued specific serial numbers and transponder codes but traditionally are named by their owners. This is considered a serious affair and a ship with a frivolous name is considered "unlucky".

This list of sources was used by the Traveller Wiki Editorial Team and individual contributors to compose this article. Copyrighted material is used under license from Far Future Enterprises or by permission of the author. The page history lists all of the contributions.
Retrieved from "http://wiki.travellerrpg.com/index.php?title=Virtue_class_Light_Freighter&oldid=689333"
Categories: