Sutherland class Ship of the Line

The Sutherland class Ship of the Line is a heavy warship.

It is a heavy battle vessel with 5-G and J-2 performance. They are are in service with the Unity of Sed Navy. Like all vessels in the Distant Fringe their jump performance is limited by their DeVoss Drives.

The Sutherland class is a streamlined, flattened wedge with a mean width of 160 meters, a mean height of 95 meters, and a length of around 400 meters: a boxy dorsal superstructure adds an additional 40 meters of height. The superstructure, the squared bows and the irregular shape of the hull increases the overall internal space, giving the ship a total enclosed volume of approximately 2.7 million cubic meters. 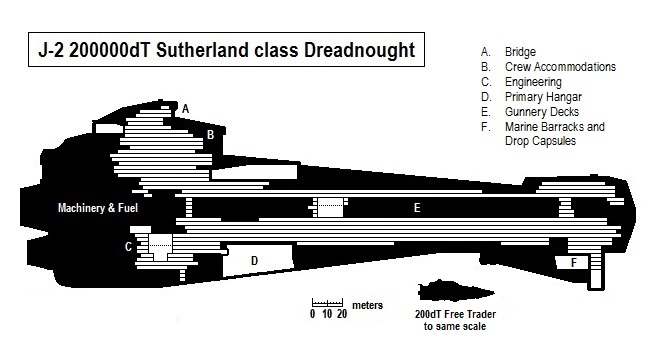 Sutherland class dreadnoughts serve with The Righteous Hand, the navy of the Unity of Sed.

The technological advancement of worlds such as Jaradin, in Halcyon Sector, allow the construction of substantially larger and better armed vessels than are commonly encountered within the Distant Fringe. The huge Sutherland class are characteristic of this, and in the hands of the psychotic Unity of Sed they present a considerable danger to other polities of the region. They give the Unity a substantial advantage in its ongoing arms race against The Last Line and other enemies.

The Sutherland class represent a huge investment in time and resources for the Unity. They embody the power of the state and form the flagships of Unity squadrons. They are protected by escorts and other smaller classes of vessel and primarily operate within the coreward parts of Halcyon Sector. Only one example, the Sutherland, is known for certain to have been completed – it is the namesake of the class. An additional three production models are believed to be under construction or entering service.

Most of the members of this class were named after regions of Sedulan. Sutherland was one of the first regions of the world to convert en masse to Arvanism.

Each vessel within the class is named by the government of the state that produces it. They generally draw on traditional naming protocols and it is not uncommon for a historical class name to be reused.

This list of sources was used by the Traveller Wiki Editorial Team and individual contributors to compose this article. Copyrighted material is used under license from Far Future Enterprises or by permission of the author. The page history lists all of the contributions.
Retrieved from "http://wiki.travellerrpg.com/index.php?title=Sutherland_class_Ship_of_the_Line&oldid=571033"
Categories: