The Jump Drive (also known as a J-Drive) is an Interstellar Drive which opens a transition to jumpspace, which allows for Faster-than-light (FTL) travel, making space travel, exploration, and colonization vastly quicker and more efficient.

Jump technology enables a ship to transition into Jump Space and emerge some great distance away within a reasonable time [...effectively multiples of 170 times the speed of light over 168 hours (+/- 10%)]. Jump drive, and its many variations, makes interstellar flight practical. Those who do not discover the jump drive are condemned to snail-paced NAFAL movement between the stars. [1]

Ships in jump are isolated, and can not detect or communicate anything; they are totally isolated in a small bubble of jumpspace until they reemerge into our universe again. Even if two ships side by side (far enough apart to avoid field interference) jump at the same instant, they are totally alone. Cases of field overlap (interference) have been known to result in direction error, range error, system damage, or ship destruction, and is advised against.

A number of lesser facts about jump drives are noted here: 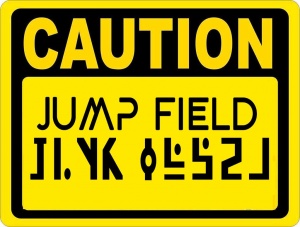 The Jump Drive was first discovered by the Ancients more than 300,000 years ago. With it they explored the greater part of Charted Space. At the conclusion of the Final War, the Ancients' jump technology was lost, although intact (damaged) artifacts were found later on, and reverse-engineered to create jump drives of a more primitive nature than their source technology.

These are some of the important dates recorded as to when certain sophont cultures have acquired the jump drive: