The Liz Zhorka class Light Trader is a mercantile starship.

The Liz Zhorka class Light Trader is a civilian vessel. It is a commercial transport typically encountered operating within clusters of stars within the Distant Fringe region. It is classified as a merchant vessel and is constructed as an X-Range design. Similar designs have been in use from the time the Distant Fringe was first settled.

The Liz Zhorka class is an airframe flattened sphere with a mean diameter of 21 meters and a mean height of 5.5 meters, with paired lateral drive housings slightly increasing the overall length and the width of the stern (with their position indicated by a shaded area on the diagram below). The slightly irregular shape of the hull increases the overall internal space, giving the ship a total enclosed volume of approximately 1,350 cubic meters. There are two decks. The machinery and fuel tanks are located aft and operations are run from a small engineering control room. The lower deck is given over to the cargo hold: an area towards the rear of the hold, positioned below the accommodations section, is set aside as a vehicle hangar. The majority of available space on the upper deck is given over to Staterooms and the turret mountings, while the bridge, computer and electronics are located forward. 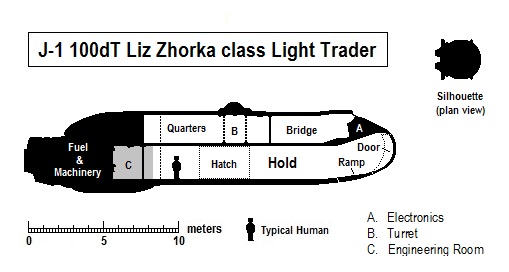 The Liz Zhorka class is a small merchant designed to carry incidental consignments of cargo. The design is representative and a large number of variants exist, particularly with regard to the allotted weapons systems, onboard electronics, and the fit out of internal spaces. The current design dates to the Golden Age, but many elements are reused and aspects of the layout and construction indicate that the vessel has Vilani origins.

Liz Zhorka class Traders are sometimes referred to as "puffers", a reference to small coastal watercraft serving isolated communities on pre-spaceflight Terra. The name has romantic connotations, implying personal freedom and a simpler way of life, but also reflects the rather claustrophobic conditions aboard those ancient trading vessels. The interior of the vessel is relatively cramped and the class are known for the substandard quality of their life support and environmental systems.

A number of companies manufacture ships equivalent to the Liz Zhorka class. They vary in hull shape and internal layout but all share the same basic design and all have very similar capabilities and performance characteristics.

Legend has it that the class were named after a murderous ship's engineer from the days of the Terran Confederation, whose crimes are remembered to this day in the form of a children's rhyme:

According to official records, the class was in fact named for the daughter of a wealthy agriculturalist.

This list of sources was used by the Traveller Wiki Editorial Team and individual contributors to compose this article. Copyrighted material is used under license from Far Future Enterprises or by permission of the author. The page history lists all of the contributions.
Retrieved from "http://wiki.travellerrpg.com/index.php?title=Liz_Zhorka_class_Light_Trader&oldid=567369"
Categories: