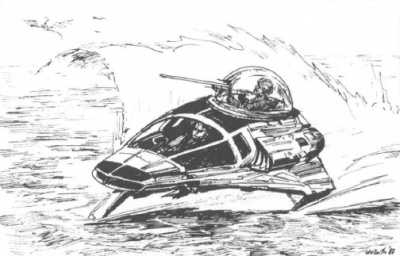 Vehicles are technological devices intended to convey sophonts or their Goods from one location to another.

Vehicles are a technological item that allows movement of Sophont or Goods from one place to another. Some Vehicles may provide a sealed environment with or without life-support, others may require the occupants and/or crew to provide their own life-support and environmental protection as required.

[a]: Starships are a separate category in this wiki, with its own subdivisions

Some vehicles are able to operate across categories: Multi-Environment Vehicles

Additionally, some methods of transport exist that defy the above classifications: Exotic Craft

Vehicles by method of lift[edit]

Transportation by class of User[edit]

Vehicles may be used by Civil, Paramilitary or Military users. Some vehicles will be specific to roles within one of these realms, but often there is cross-over between realms.

This list of sources was used by the Traveller Wiki Editorial Team and individual contributors to compose this article. Copyrighted material is used under license from Far Future Enterprises or by permission of the author. The page history lists all of the contributions.
Retrieved from "http://wiki.travellerrpg.com/index.php?title=Vehicle&oldid=672768"
Categories: