A Diesel Locomotive is used for mass transit of passengers and/or cargo.

Diesel locomotives that have internal combustion engines using hydrocarbon fuel are better described as diesel-electric locomotives. Their engines don't drive the wheels directly, instead powering an electric generator. This in turn powers electric motors that are connected to the wheels and are capable of rapidly generating very high levels of torque.

Large low-speed internal combustion engines (as used in locomotives and maritime vessels where the overall engine weight is relatively unimportant) can reach high effective efficiencies. As such they remain an important element of infrastructure throughout the TL:4-6 tech epoch.

Because of their power and efficiency, diesel locomotives are used to move passengers and large quantities of cargo between widely separated locations. Long freight trains, headed by one or more diesel locomotives and hauling hundreds or even thousands of tons of cargo, remain a common sight across the Imperium.

A mineral hopper wagon, a tanker and a boxcar, types of rolling stock used to haul different varieties of goods and freight. 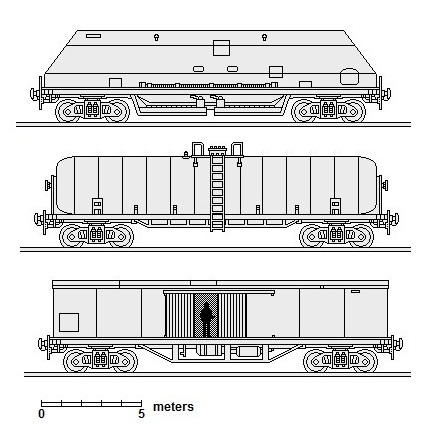 The diesel engine is named for Rudolf Diesel, a scientist and engineer of pre-spaceflight Terra.

Diesel engine is something of a misnomer: it refers to any variety of large internal combustion engine that utilizes a heavy hydrocarbon fuel and gives a good range per unit of fuel.

This list of sources was used by the Traveller Wiki Editorial Team and individual contributors to compose this article. Copyrighted material is used under license from Far Future Enterprises or by permission of the author. The page history lists all of the contributions.
Retrieved from "http://wiki.travellerrpg.com/index.php?title=Diesel_Locomotive&oldid=612463"
Categories: