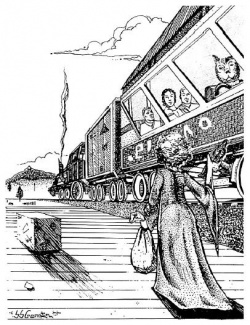 A Train is a kind of composite vehicle often used for mass transit of passengers and/or cargo.

A train is a form of transport consisting of a series of connected vehicles that generally runs along a prepared path or track to transport cargo or passengers. The word "train" comes from the Old Terran French trahiner, derived from the Latin trahere meaning "to pull" or "to draw."

The listed technological level is the lowest at which the particular type of train is estimated to be efficiently constructed. Similar trains built at a higher technological level are more efficient, are likely to be constructed from more advanced materials, and may have an improved performance. They may also include improved items of onboard equipment such as upgraded environmental systems. Often a higher technology design exists which directly supersedes a similar but less advanced version.

Trains designed and built on a world generally only function on that one world. If they are transported to other worlds they will generally perform far below their normal parameters, often with catastrophic consequences. For example, air-breathing internal combustion power plants designed on a world with a standard atmosphere will struggle in thin atmospheres and may suffer internal damage if operated in dense atmospheres.

Trains designed to operate on one world may be modified to allow them perform more efficiently on other worlds.

A huge industry exists offering such conversions. Skilled mechanics change components designed to utilize atmospheric gases and upgrade or replace fuel and exhaust systems. Adjustments are made to transmission, suspension and braking systems, ballast is added or excess weight is removed, and power plants are tweaked, retuned or even entirely rebuilt. These modifications and conversions allow the train to operate relatively efficiently and safely within its new environmental conditions.

Trains tend to be a pillar of transportation infrastructure for sophont societies during the TL:1-9 Foundational Period or Ur-Period of development. By TL:10-12, the conventional groundcraft technology becomes increasing supplanted and replaced by gravcraft. Grav trains are a viable technology and some societies have developed the technology viably.

Gravitic trains have little to no need for preprepared infrastructure.

This list of sources was used by the Traveller Wiki Editorial Team and individual contributors to compose this article. Copyrighted material is used under license from Far Future Enterprises or by permission of the author. The page history lists all of the contributions.
Retrieved from "http://wiki.travellerrpg.com/index.php?title=Train&oldid=612406"
Categories: