A Railroad Locomotive is used to provide motive power for a Railroad Train.

Railroad Locomotives go through many incarnations as technology progresses (see images below). Since form follows function, these don't differ too much between worlds.

Railroad Locomotives are an important part of transportation infrastructure on many worlds. A variety of Terran-style locomotives are depicted: other worlds and cultures produce their own unique styles of rolling stock. 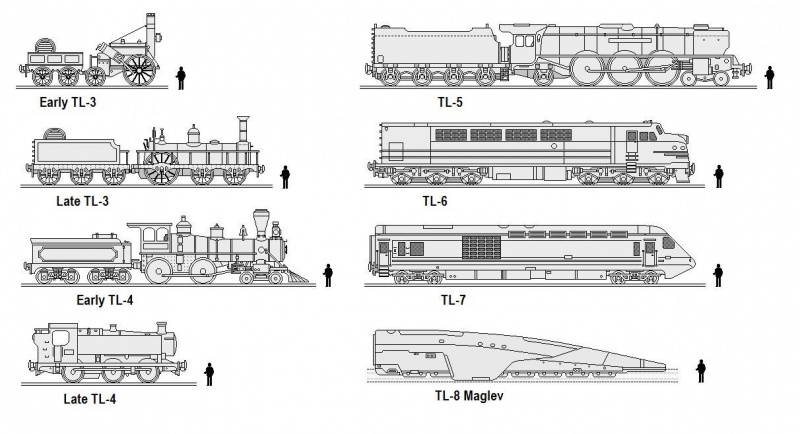 Note: The Mag-Lev Locomotive is NOT a railroad locomotive

A train is a form of transport consisting of a series of connected vehicles that generally runs along a prepared path or track to transport cargo or passengers. The word "train" comes from the Old French trahiner, derived from the Latin trahere meaning "to pull" or "to draw."

Railroad Locomotives go through many incarnations as technology progresses - with changes in power source, power transmission and connection to the track:-

This list of sources was used by the Traveller Wiki Editorial Team and individual contributors to compose this article. Copyrighted material is used under license from Far Future Enterprises or by permission of the author. The page history lists all of the contributions.
Retrieved from "http://wiki.travellerrpg.com/index.php?title=Railroad_Locomotive&oldid=612450"
Categories: