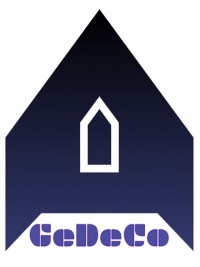 The General Development Company is a semi-commercial corporation chartered to both conduct interstellar trade and develop a higher technological base within its area of operations.

GeDeCo's charter obligates it not only to conduct interstellar trade, but also to increase tech levels.

GeDeCo is governed by a CEO with an advisory board of directors. Local control is exercised by hand chosen leaders selected by the CEO. The company has a strong Vilani lineage although later Imperial influences have brought in Solomani and even Imperial Aslan influences.

The company dates back to the period immediately following the Civil War, when Empress Arbellatra resettled many nobles - both supporters and rivals - on new border fiefs.

This list of sources was used by the Traveller Wiki Editorial Team and individual contributors to compose this article. Copyrighted material is used under license from Far Future Enterprises or by permission of the author. The page history lists all of the contributions.
Retrieved from "http://wiki.travellerrpg.com/index.php?title=General_Development_Company&oldid=563194"
Categories: