The Arden class System Defense Boat is a defensive warship and a bigcraft.

The Arden class System Defense Boat is a heavily armored military bigcraft used by the defense forces of Arden, an important neutral system in the Spinward Marches. It is a rugged, reliable design that has seen much action and is well liked by its crews. The Federation of Arden is believed to operate at least four of these vessels and a number of additional completed hulls have been exported to neighboring neutral worlds.

The Arden class is a flattened streamlined wedge with a mean width of 48 meters, a mean height of 25 meters, and a length of around 90 meters. The ship has a total enclosed volume of approximately 39,150 cubic meters. The hull is solid and extremely thick, though there are access and maintenance spaces, and almost half of the internal volume is given over to machinery and fuel. The vessel is a tail lander: the decks within the vessel are arranged vertically and are accessed by elevator shafts. The bridge, the computer and the electronics are forward, accommodations are located centrally, while the cargo hold is located aft and is at ground level when the vessel is landed. The avionics bay and computer room are spacious and can be accessed. 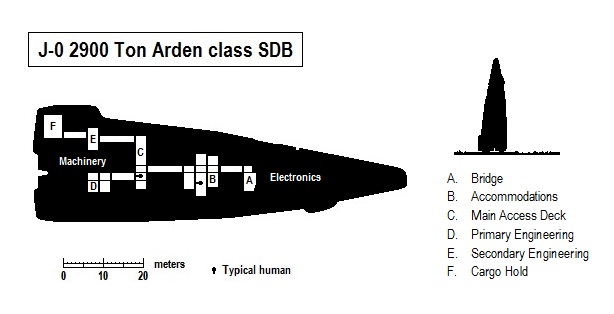 This vessel is a streamlined needle/wedge configuration hull to provide defense versus meson armed combatants. The hull carries as much armor as possible the only other defense is four triple sand caster turrets grouped as a battery. A set of five triple pulse laser turrets can target up to fifteen targets to blunt missile strikes and fend off fighters. The major weaponry is a pair of massive weapon bays. One is allocated for missiles and the other is a particle accelerator. The 5G main drive allows fair agility. The model/2 bis computer is seen as a tactical limitation. There is a large fifty ton cargo bay that allows some flexibility. Extra troops, vehicles, and supplies can be moved around the system to support defensive operations needed to maintain the system's strict neutrality.

The Federation of Arden builds and maintains as large a system defense force as it can afford. The linchpin of the Federation Defense Fleet is a class of large system defense boats which strain the local TL–8 ship building capabilities. Despite it's lower Tech Level (TL-8), it often rebuilt with modernized ship weaponry (...typically to a TL:13-15 standard) and are still often a potent threat, even to top-of-the-line warships.

Arden-class vessels are typically named after great generals or admirals from nearby mainworlds.

This list of sources was used by the Traveller Wiki Editorial Team and individual contributors to compose this article. Copyrighted material is used under license from Far Future Enterprises or by permission of the author. The page history lists all of the contributions.
Retrieved from "http://wiki.travellerrpg.com/index.php?title=Arden_class_System_Defense_Boat&oldid=598553"
Categories: