The TC16 Jyhala class Assault Cruiser is a warship.

The Jyhala class is a combat vessel of the Trooles Confederation. 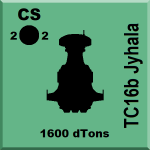 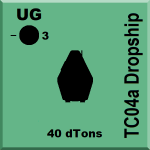 The Jyhala class is a cruiser deployed by the Trooles Confederation. Examples of the class can be encountered throughout the coreward parts of Theta Borealis Sector and occasionally within the rimward subsectors of Astron Sector. The vessel has a fully streamlined conical configuration hull and is fitted with fuel scoops and a fuel purification plant, allowing it to perform wilderness gas giant or hydrosphere refueling. Its performance (2-G and J-2) is considered substandard.

The TC16 Jyhala class Assault Cruiser class is used by the Trooles Confederation. These fully streamlined conical structures can land on planetary surfaces. They carry four dropships and a platoon of Air Rafts for the marine company. Limitations of the design include: the loss of defensive armor and a weaker sand caster battery. The particle accelerator bay is used for protected forces operations, and it requires a much larger fusion power plant. The 118 marines can use drop capsules to attack from orbit. The 4 lowberths are for wounded or prisoners. The design suffers from less drive performance, no computer back ups, no evasive agility. They dispense with the plasma guns in favor of a more powerful beam laser battery. They carry more cargo to better provision longer duration planet-side military interventions.

Vessel Peculiarities:
No information yet available.

Class Naming Practice/s:
Vessels of the Trooles Confederation are given alphanumeric designations and callsigns by other interstellar states. TC refers to Trooles Confederation (a designation applied to all Confederation combat units), 16 is a multiple of hundreds of tons of displacement and also indicates at a glance the number of weapons mounts, and when it is used 'b' refers to the version of the vessel, relating to its construction tech level and bracketing its maximum jump potential. Type codes will often repeat: 'Jyhala' is an easy to remember class name to identify the specific type of vessel.

This list of sources was used by the Traveller Wiki Editorial Team and individual contributors to compose this article. Copyrighted material is used under license from Far Future Enterprises or by permission of the author. The page history lists all of the contributions.
Retrieved from "http://wiki.travellerrpg.com/index.php?title=TC16_Jyhala_class_Assault_Cruiser&oldid=667789"
Categories: