The Starblade class Executive Yacht is a small luxury vessel and an interstellar starship.

The Starblade class Executive Yacht is a private vessel occasionally encountered within the Distant Fringe. It is classified as a Non-Commercial Vessel and is constructed as a conventional design. Similar designs have been in use from the time the Distant Fringe was first settled. Some believe that it was a further development of an ancient Solomani design. Despite its superior atmospheric performance the vessel has no wilderness refueling capability.

The Starblade class is a streamlined, flattened cone with a mean width of 13 meters, a mean height of 9 meters, and a length of around 54 meters. The ship has a total enclosed volume of approximately 2,700 cubic meters. There are two decks: a main deck with the forward section housing the bridge and the aft section containing the passenger accommodations and the hangar for the gig, and a lower deck given over to crew quarters and the cargo hold. The engineering section is located aft and the fuel tanks wrap around the stern. The avionics bay is spacious and can be accessed. 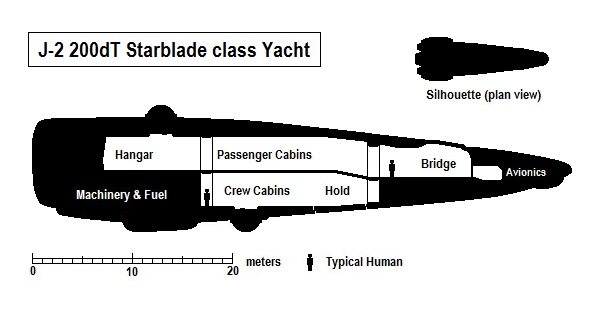 These vessels are very rarely encountered outside of the Distant Fringe region. However, misjumps do occur and anomalies with bizarre spacetime and jumpspace effects exist: as such, craft of this type are not entirely unknown within Charted Space.[4]

The design is representative and a large number of variants exist, particularly with regard to the allotted weapons systems, onboard electronics, and the fit out of internal spaces.

A number of companies manufacture ships equivalent to the Starblade class. They vary in hull shape and internal layout but all share the same basic design and all have very similar capabilities and performance characteristics.

This list of sources was used by the Traveller Wiki Editorial Team and individual contributors to compose this article. Copyrighted material is used under license from Far Future Enterprises or by permission of the author. The page history lists all of the contributions.
Retrieved from "http://wiki.travellerrpg.com/index.php?title=Starblade_class_Executive_Yacht&oldid=593530"
Categories: