The Nimrod class Fuel Lighter is a mercantile bigcraft.

The Fuel Lighter is a non-jump Tanker encountered within the Distant Fringe region and is classified as a Bulk Cargo Carrier. It is designed to operate within a single star system, skimming fuel from gas giant worlds and ferrying it back to the mainworld's Starport facilities or transferring it directly to waiting vessels. Similar designs have been in use from the time the Distant Fringe was first settled.

The Nimrod class is a partially streamlined cylinder with a mean diameter of 40 meters and a length of around 160 meters. Some sections are narrower and some are wider, giving it a total enclosed volume of approximately 202,500 cubic meters. Huge fuel tanks form the majority of the interior of the ship. The main tanks are subdivided into smaller interlinked cells containing baffles, compressors, and pumping equipment, and are separated by service decks. The engineering section is located aft, within the core of the vessel, while the bridge and accessible sections of the vessel such as the crew quarters and the cargo hold are located forward. Transfer shafts, offset from one another to reduce the risks associated with accidents or damage, link the various decks together. 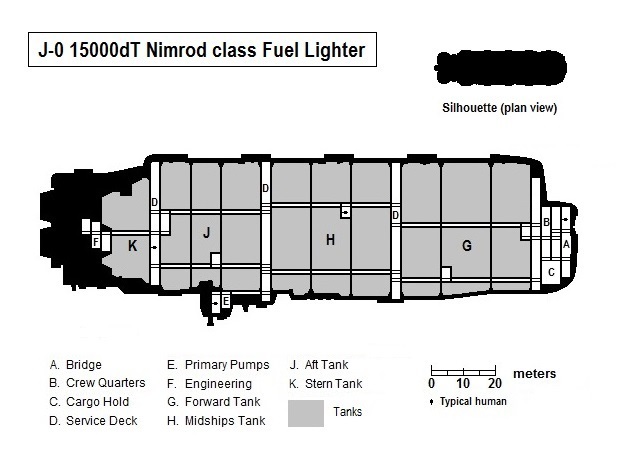 The design is representative and a large number of variants exist, particularly with regard to the allotted weapons systems, onboard electronics, and the fit out of internal spaces. Fuel Lighters are designed to work within a single system, skimming fuel from gas giant worlds and transporting it back to the local starport, using its onboard refining plant to process and purify the product en route. Examples of the Nimrod class are rarely seen in systems lacking gas giants.

Nimrods are Gas Traders. They may work with orbital port facilities such as the Harbor class Station.

Nimrods and similar vessels are generally regarded as "hell ships", capable of generating immense profits for their owners and driven extremely hard by their captains and masters to do as many skimming runs as possible. In busy ports, with a constant demand for fuel, Nimrods fight to shave minutes off of their total turnaround time.

A number of companies manufacture ships equivalent to the Nimrod class. They vary in hull shape and internal layout but all share the same basic design and all have very similar capabilities and performance characteristics.

While fuel lighters are well built and capable vessels, the various classes see hard service and receive relatively low levels of maintenance. They are driven hard by their owners and commanders, exhausting their crews and further increasing the hazards. The engineering decks, in particular, linked by a single transfer shaft and entirely surrounded by fuel tanks, are considered a death-trap.

This list of sources was used by the Traveller Wiki Editorial Team and individual contributors to compose this article. Copyrighted material is used under license from Far Future Enterprises or by permission of the author. The page history lists all of the contributions.
Retrieved from "http://wiki.travellerrpg.com/index.php?title=Nimrod_class_Fuel_Lighter&oldid=554166"
Categories: