The Furnish class Tanker is an auxiliary.

The Furnish class is a large tanker vessel. It collects and refines hydrogen fuel and either transports it to a starport or provides it directly to another vessel.

These large and generally grubby ships may be encountered almost anywhere. Their outer skins become stained and darkened by trace chemicals while skimming gas giant atmospheres and they frequently exhibit dents and scrapes resulting from poor maneuvering while vessels are coming alongside to refuel. Commercial tankers may serve an organisation, supporting its operational craft and providing them with refined fuel on demand, or may operate as independent gas traders, selling fuel directly from their tanks, particularly in systems with starports that do not provide local refuelling facilities. Military tankers will generally be accompanied by at least one escort vessel. 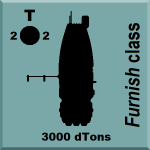 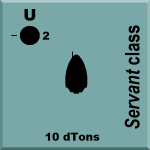 The Furnish class is an auxiliary tanker with performance of J-2 and 2-G acceleration. It is a relatively large, relatively slow ship, equipped with strong sandcaster defenses and laser turrets most commonly used in a point defense role. The design is fully streamlined, giving good atmospheric performance, allowing it to skim for fuel, and enabling it to perform surface landings.

The vessel is an unevenly shaped cone with an overall length of 113 meters, a mean diameter of 37 meters, and a volume of approximately 40,500 cubic meters. The ship has many pods, blisters, cowlings, recesses, housings, and protuberances over its surface. Despite this slightly irregular shape it is aerodynamic and may operate within planetary atmospheres.

The design is representative and large numbers of variants exist, particularly with regard to the installed weapons systems, the allotted onboard electronics, and the fit out of accommodations and internal spaces. 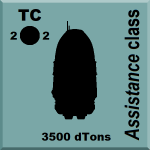 Vessel Peculiarities:
The design is capable of independent operations (it can provide its own fuel) and can transport incidental supplies in its hold. The Furnish class develops a characteristic judder during fuel skimming operations, when the main tanks reach 50% capacity and auxiliary pumping gear begins transferring fuel to secondary tanks.

The boom arms that extend from the tankers hull and transfer fuel to adjacent ships are easily damaged. The vessel carries multiple spares and extra components.

The class was originally designed to have three launches and adequate hangar space was provided for them. These subcraft were intended to transport personnel while the parent vessel remained in orbit providing refuelling services, and to act as lifeboats in an emergency. The class was only ever issued with two launches as standard (likely as a result of corporate cutbacks and penny-pinching) resulting in inadequate escape facilities for the crew in the event of their needing to evacuate the vessel. Individual owners and captains may upgrade by purchasing an additional subcraft if desired, though more often the vacant hangar space is used as extra cargo storage.

Class Naming Practice/s:
Individual vessels are generally named by the organization that operates them. This is considered a serious affair and a ship with a frivolous name is considered "unlucky". Spacefarers tend to be superstitious and such vessels may find that they attract less commercial interest or are less favored for berthing slots, further adding to their unlucky reputation.

This list of sources was used by the Traveller Wiki Editorial Team and individual contributors to compose this article. Copyrighted material is used under license from Far Future Enterprises or by permission of the author. The page history lists all of the contributions.
Retrieved from "http://wiki.travellerrpg.com/index.php?title=Furnish_class_Tanker&oldid=666537"
Categories: