The Harbor class Orbital Station is a large Space Station.

The Orbital Station is a large commercial orbital port facility found within systems in the Distant Fringe region. It is classified as an Orbital City. Similar designs have been in use from the time the Distant Fringe was first settled.

The station is constructed as a close structure. It has four major elements - a flattened sphere-shaped primary hull containing the passenger facilities, a tall spire, a long commercial berthing arm, and a shorter military berthing arm. The primary hull has a height of 40 meters, a diameter of 220 meters, and contains 10 decks of varying height. The spire has a height of 150 meters and contains 45 decks. The military arm has a length of 180 meters and terminates in a COACC installation. The commercial arm has a length of around 450 meters and terminates in isolation and quarantine facilities. Some sections of the station are narrower and some are wider, giving it a total enclosed volume of approximately 1,280,000 cubic meters.

The main fuel tanks and the heavy machinery are located at the base of the spire and the main control center forms its peak. The main cargo holds are located below the fuel tanks, forming the upper decks of the primary hull, and include the cryogenic (low berth) sections. General crew quarters are located within the central section of the spire, though Stewards have rooms close to passenger accommodations.

Middle passage accommodations are found in the less desirable inner zones of the primary hull while first class cabins are traditionally located on its edge, often with windows offering spectacular views. The main commercial strip and leisure facilities are located in the primary hull's core zones and are focused on a multi-deck open plaza. The commercial shuttle port lies at the base of the primary hull and below that is a secondary control room.

The arms are immensely strong and are fitted with multiple docking points, an internal walkway, and external transportation pods. 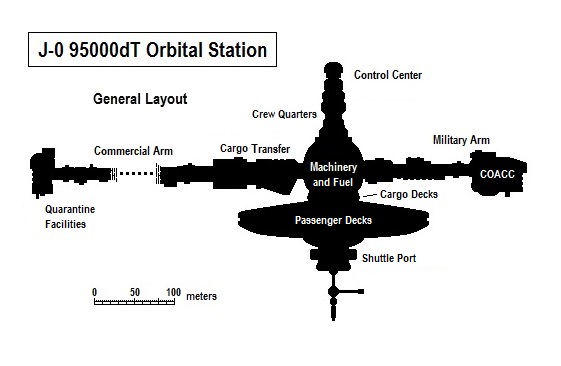 A basic plan of the station indicating the general layout and positioning of major elements.

Harbor class Orbital Stations are rugged and known for their excellent safety record. Many are finished to very high standards, offering services and facilities equivalent to surface hotels, leisure complexes and shopping malls, but with the additional benefit that they are free of any local taxes and surcharges. The design is representative and a large number of variants exist, particularly with regard to the allotted weapons systems, onboard electronics, and the fit out of internal spaces.

The station relies on a variety of support craft.

The Distant Fringe is said to be a far rimward-trailing area inhabited by colonists and refugees originating on Terra. The region is extremely isolated, lying hundreds of parsecs from the rest of Charted Space and separated from it by almost uncrossable rifts that were once broached by a system of calibration Points and the use of tankers. Those few academics within Charted Space who have found references to the Distant Fringe regard it as little more than a tall tale. Likewise, many of the inhabitants of the Distant Fringe believe the existence of Charted Space to be mythical.[3]

Vessels originating within the Distant Fringe are very rarely encountered outside of the region. However, misjumps do occur and anomalies with bizarre spacetime and Jumpspace effects exist: as such, craft of this type are not entirely unknown within Charted Space. Data about stations and facilities may be known from records found aboard such far-flung craft.[4]

A number of companies manufacture facilities equivalent to the Harbor class Station.

This list of sources was used by the Traveller Wiki Editorial Team and individual contributors to compose this article. Copyrighted material is used under license from Far Future Enterprises or by permission of the author. The page history lists all of the contributions.
Retrieved from "http://wiki.travellerrpg.com/index.php?title=Harbor_class_Orbital_Station&oldid=655201"
Categories: