The Gunsan class Orbital Dockyard is a large Space Station.

The Orbital Dockyard is a large commercial orbital facility found within systems in the Distant Fringe region. It is classified as an Orbital Complex. Similar designs have been in use from the time the Distant Fringe was first settled.

The dockyard is constructed as a Dispersed Structure. The core of the station is the yard space, an empty cylinder surrounded by joined rings with an enclosed volume of approximately 1.3 million dTons. Sections within this cylinder are set aside as maintenance facilities, an engineering plant, and an equipment testing facility: each area has multiple hangars and sealed compartments. Individual dockyards contain the same basic elements but their layouts may vary considerably, depending on the needs and preferences of the operator.

The main section of the dockyard is a boxy structure built onto the exterior of the rings. It contains much of the heavy machinery, the operations control center, and the crew and passenger accommodations. An enclosed boatyard is set aside for the manufacture of smaller starships and smallcraft.

Each area of the dockyard can be accessed by transportation pods that follow trackways mounted on the interior of the yard rings. All sections of the yard can also be accessed by internal walkways, though many areas have no grav plates and some sections may not be pressurized.

The dockyard mounts x80 Heavy Repulsor units in bays spread over the interior of the yard space rings. These are used as construction tools, working in groups to maneuver and manipulate very large components. 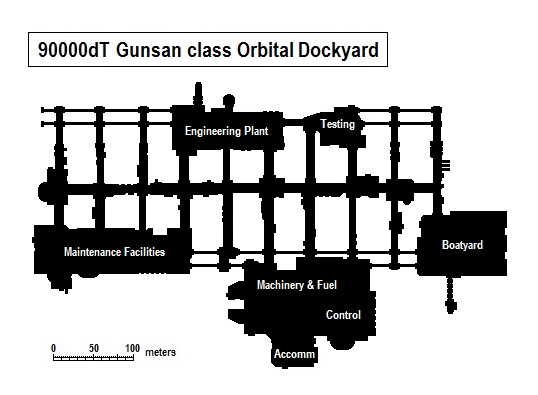 A basic plan of the station indicating the general layout and positioning of major elements.

Gunsan class Orbital Dockyards are rugged and known for their excellent safety record. The design is representative and a large number of variants exist, particularly with regard to the onboard electronics and the fit out of internal spaces.

The station relies on a variety of support craft.

The Distant Fringe is said to be a far rimward-trailing area inhabited by colonists and refugees originating on Terra. The region is extremely isolated, lying hundreds of parsecs from the rest of Charted Space and separated from it by almost uncrossable rifts that were once broached by a system of calibration Points and the use of tankers. Those few academics within Charted Space who have found references to the Distant Fringe regard it as little more than a tall tale. Likewise, many of the inhabitants of the Distant Fringe believe the existence of Charted Space to be mythical.[3]

Vessels originating within the Distant Fringe are very rarely encountered outside of the region. However, misjumps do occur and anomalies with bizarre spacetime and Jumpspace effects exist: as such, craft of this type are not entirely unknown within Charted Space. Data about stations and facilities may be known from records found aboard such far-flung craft.[4]

A number of companies manufacture facilities equivalent to the Gunsan class dockyard.

This list of sources was used by the Traveller Wiki Editorial Team and individual contributors to compose this article. Copyrighted material is used under license from Far Future Enterprises or by permission of the author. The page history lists all of the contributions.
Retrieved from "http://wiki.travellerrpg.com/index.php?title=Gunsan_class_Orbital_Dockyard&oldid=655200"
Categories: