The Colossus class Heavy Lander is a transport spaceplane spacecraft.

The Heavy Lander is designed to ferry cargo and fuel between a world's surface and close orbit. It is a common in-system transport vessel within the Distant Fringe and is occasionally carried as a subcraft aboard large commercial vessels. Similar designs have been in use from the time the Distant Fringe was first settled.

The Colossus class is a streamlined though rather boxy cone with a mean width of 15 meters, a mean height of 18 meters, and a length of around 80 meters. The ship has a total enclosed volume of approximately 16,200 cubic meters. There is a single dorsal through deck running the length of the vessel: the bridge is located forward, cabins and facilities are located centrally, and the engineering section is aft. The majority of the vessel is given over to a cavernous cargo hold that is accessed by side hatches and a large set of bow doors. 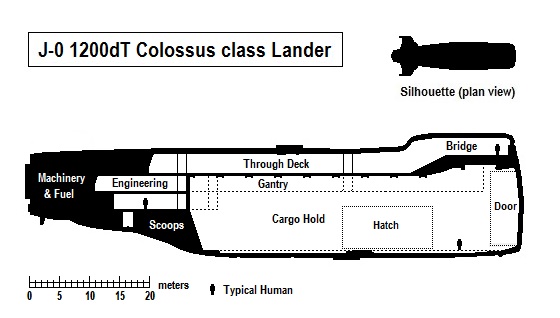 A large interface craft primarily designed to shuttle fuel, cargo, and sundries between a world's surface and close orbit. It is frequently used as an in-system transport, carrying equipment and supplies to secondary worlds within a system. The design is representative and a large number of variants exist, particularly with regard to the allotted weapons systems, onboard electronics, and the fit out of internal spaces.

Different examples of the design are known by many different names but all have very similar performance characteristics and capabilities.

This list of sources was used by the Traveller Wiki Editorial Team and individual contributors to compose this article. Copyrighted material is used under license from Far Future Enterprises or by permission of the author. The page history lists all of the contributions.
Retrieved from "http://wiki.travellerrpg.com/index.php?title=Colossus_class_Heavy_Lander&oldid=602752"
Categories: