The Cerebrus class Strike Fighter is a combatant smallcraft.

The Strike Fighter is a cheap, reliable vessel designed to precisely engage enemy units. Similar designs have been in use from the time the Distant Fringe was first settled. It is defined as a microfighter due to its small size. 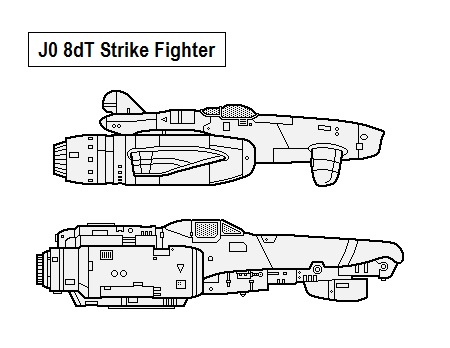 An ubiquitous design used throughout the Distant Fringe, the Strike Fighter is cheap, durable and reliable. The design is representative and a large number of variants exist, particularly with regard to the allotted weapons systems and onboard electronics. Despite their status as space fighters, designs of this type have airframe features, augmenting their handling characteristics within planetary atmospheres.

The role in which these vessels excel is the precise delivery of ordnance, on target, over time. Naval wisdom holds that "the better the payload delivery, the better the rate of mission success". The extra crew space is dedicated to a wizard of electronic warfare: this guy calls the shots, making the pilot a glorified chauffeur.

The ability to ensure that the package gets delivered to the battle space and that enemy ordnance is left confused and disoriented is vital for the survival of larger navy and commercial vessels. To decoy, jam and disable enemy weapon volleys and get rounds on target with laser guided accuracy is of paramount importance. The need for mission success means that formations of Strike Fighters often have dedicated Escort Fighters assigned to ensure they arrive intact and ex-filtrate to fight again. The covering escorts are considered expendable while Strike Fighters are not.

Strike Fighters are mass produced commercial fighter craft, made from standardized components and assembled in class A and B starports of TL-8 or greater across the region. A range of different hull shapes are available but two main variants have become standard:

This list of sources was used by the Traveller Wiki Editorial Team and individual contributors to compose this article. Copyrighted material is used under license from Far Future Enterprises or by permission of the author. The page history lists all of the contributions.
Retrieved from "http://wiki.travellerrpg.com/index.php?title=Cerebrus_class_Strike_Fighter&oldid=519825"
Categories: