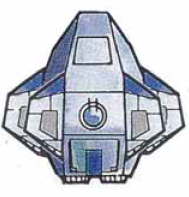 Packet Ships conduct similar missions to liners and courier vessels. They are generally understood to perform unscheduled missions where postal routes do not exist. Most are equipped with mail vaults and secure staterooms. [2]

Packet ships are a class of small merchantmen generally in the 200 to 600-ton range designed to fill the gaps left by the trade lanes that follow the x-boat routes. They may be operated by planetary governments, private individuals, or corporations, they may even be assigned by a subsector duke concerned with developing the economy of their subsector. [5]

Packet ships perform high priority missions to deliver very high value cargo or passengers to sensitive destinations. They generally focus on high value passengers who carry top secret messages in areas where the fear of electronic intercept is a concern. Packet ships usually travel at high burn to make themselves difficult to intercept. Many use jump shadows or other masking features to minimize detection. [10]

A number of types of communication vessels exist, and the packet ship has come to occupy a ship mission niche not occupied by x-boats, courier vessels, relay vessels, or other kinds of ships that perform communication duties. Packet ships were once far more numerous before the establishment of the X-boat System in the year 624. [11]

Some of the most commonly used vessels in this role include:

This list of sources was used by the Traveller Wiki Editorial Team and individual contributors to compose this article. Copyrighted material is used under license from Far Future Enterprises or by permission of the author. The page history lists all of the contributions.
Retrieved from "http://wiki.travellerrpg.com/index.php?title=Packet_Ship&oldid=655283"
Categories: