The Revenant class Light Fighter is a combatant smallcraft.

The Light Fighter is a cheap, reliable vessel designed to precisely engage enemy units. Similar designs have been in use from the time the Distant Fringe was first settled. It is defined as a microfighter due to its small size. 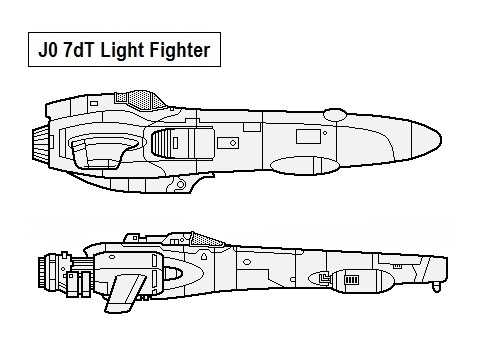 An ubiquitous design used throughout the Distant Fringe, the Light Fighter is cheap, durable and reliable. The design is representative and a large number of variants exist, particularly with regard to the allotted weapons systems and onboard electronics. Despite their status as space fighters, designs of this type have airframe features, augmenting their handling characteristics within planetary atmospheres.

These craft are generally limited when trying to attack capital ships: the difference in computational power is a serious limitation in scoring hits. The agility demands that missiles are carried and there is no room for larger computers. The lack of big computers does, however, help help keep the cost per unit relatively low. These craft excel at tackling other fighters of their ilk and the interdiction of merchant traffic. They can operate from small hidden bases and they can dominate the COACC environment as dual environment combatants. The autocannon allows limited tank busting, versus enemy army and marine vehicles, conserving the more expensive missiles for dogfighting.

Light Fighters are mass produced commercial fighter craft, made from standardized components and assembled in class A and B starports of TL-9 or greater across the region. A range of different hull shapes are available but two main variants have become standard:

This list of sources was used by the Traveller Wiki Editorial Team and individual contributors to compose this article. Copyrighted material is used under license from Far Future Enterprises or by permission of the author. The page history lists all of the contributions.
Retrieved from "http://wiki.travellerrpg.com/index.php?title=Revenant_class_Light_Fighter&oldid=514696"
Categories: