The KE7b Virulent class Corvette is a light warship.

The Virulent class is a combat vessel of the Korsumug Empire.

Human opponents have various nicknames for the class, including skeleton, in reference to its frame structure, and nest, referring to the swarm of fighters it carries. 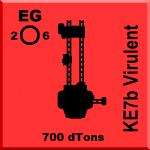 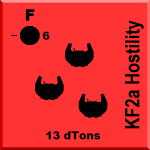 The Virulent class is a fast, medium range combat vessel with 6-G and J-2 performance. It carries a mixture of weaponry and is able to hold its own in a firefight, though it tends to hang back and support its fighters rather than actively engage. It is a long open frame vessel with a large aft section and a smaller enclosed forward section.

The Virulent class corvette is an ubiquitous type of warship used by the Korsumug Empire, typically serving as a minor component in a patrol force or as the core element of a small raiding group. Early low-jump examples of the class served on the Korsumug Main, where they saw frequent active service.

A number of redesigns with more powerful drives were fielded as the Korsumug Empire began to venture to worlds further from the Main. This resulted in the KE7b variant, equipped with a Jump-2 drive.

Examples of the Virulent class can be encountered throughout Mavuzog Sector and Theta Borealis Sector.

Vessel Peculiarities:
The vessel is entirely reliant on support craft (such as tankers) for refuelling. As such, they are most commonly deployed in a defensive role.

Class Naming Practice/s:
Vessels of the Korsumug Empire are given alphanumeric designations and callsigns by other interstellar states. KE refers to Korsumug Empire (a designation applied to all Korsumug combat units), 7 is a multiple of hundreds of tons of displacement and also indicates at a glance the number of weapons mounts, and 'b' refers to the version of the vessel, relating to its construction tech level and bracketing its maximum jump potential. Type codes will often repeat: 'Virulent' is an easy to remember name to identify the specific type of vessel.

This list of sources was used by the Traveller Wiki Editorial Team and individual contributors to compose this article. Copyrighted material is used under license from Far Future Enterprises or by permission of the author. The page history lists all of the contributions.
Retrieved from "http://wiki.travellerrpg.com/index.php?title=KE7b_Virulent_class_Corvette&oldid=665098"
Categories: