The Distribution class Commercial Carrier is a mercantile starship.

The Distribution class is a large commercial carrier. It is classified as a Ship Tender. 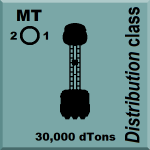 It is common practice for these vessels to serve as container ships, carrying externally mounted sealed cargo modules.

The Civilian Ship Transporter is capable of carrying "overburden" cargos: a payload of up to 30,000 dTons. The major limiting factor on overburdening a vessel is the capability of the ship's Model/4 Computer. If the total displacement tonnage of the vessel, including its overburden cargo, is 50,000 dTons or more, the computer cannot perform the calculations necessary to initiate a jump transition.

No information yet available

This list of sources was used by the Traveller Wiki Editorial Team and individual contributors to compose this article. Copyrighted material is used under license from Far Future Enterprises or by permission of the author. The page history lists all of the contributions.
Retrieved from "http://wiki.travellerrpg.com/index.php?title=Distribution_class_Commercial_Carrier&oldid=669795"
Categories: