Bellerophon is a high-population, pre-rich water world with a billion or more sophonts in population size.

Bellerophon is a high-population water world located on the Rim Main within Esperance Subsector.

The planet has a pleasant climate, ranging from tropical at the equator to cool at the poles, but the vast ocean serves to moderate climatic extremes. There are periodic seasonal Coriolis storms — called yaz yugiyor locally — which can grow to awesome dimensions as they cross thousands of kilometers of unbroken sea, but these are dangerous only to small boats and aircraft which venture too far from inhabited regions, into places where weather satellite predictions are not available.

Bellerophon is a water world; except for a few islands and for reef-flats exposed only at low tide, the entire surface is covered by water.

A map of Bellerophon. 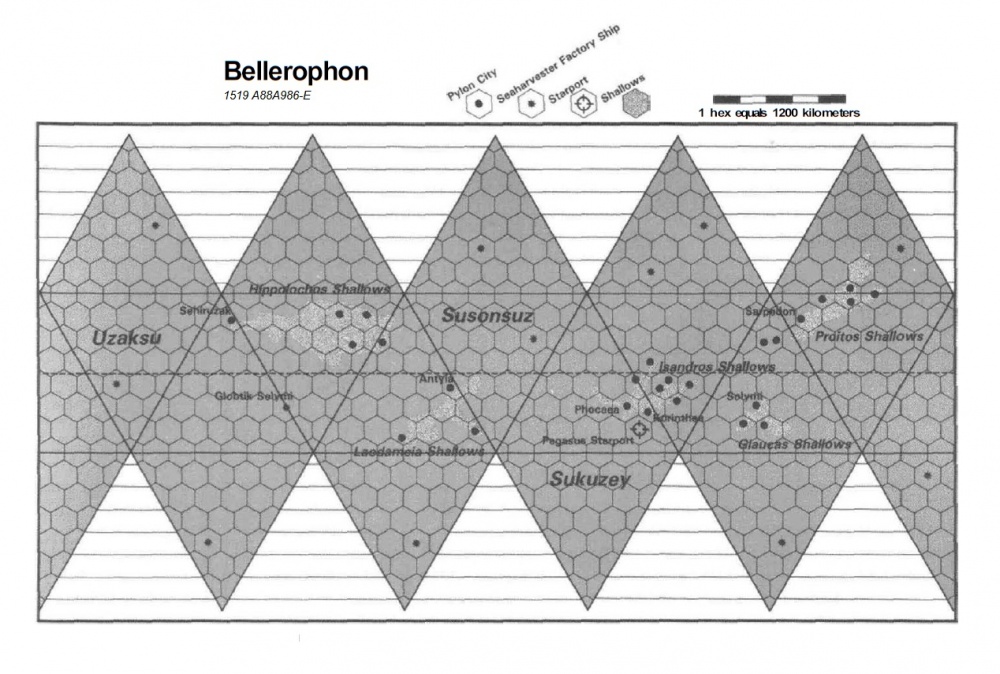 Bellerophon contains a number of celebrated and well-known species of fauna and flora. These biota are often featured in books of popular fiction and on the Tri-D.

Bellerophon is well-knopwn for at least two members of its fauna:

Bellerophon's flora, for the most part, is considered typical for an ocean (marine) world and hasn't attracted as much popular attention as its fauna. However, one particular kind of flora is an important part of the of the Daghadasi food chain, which helps to maintain the O2-CO2 atmosphere of the planet.

The Bellerophon Sea-bottom Complexes are one of the most-studied undersea megastructures in Charted Space.

Bellerophon, as a member world of the Third Imperium, holds the estates of three members of the Imperial Nobility, who are charged with overseeing the world.

Bellerophon has a Class A Starport, an excellent quality installation which includes all the expected amenities including refined fuel for starships, brokerage services for passengers and cargo, and a variety of ship provisions. There is a shipyard capable of doing annual maintenance, overhauls and other kinds of repair, and construction of both starships and non-starships. Most ports of this classification have both a Highport and a Downport.

It is one of four worlds in the Vegan Autonomous District with an almost completely human population.

Customs, trade, and commerce restrictions are loose, but laws are well enforced. In the pylon cities, weaponry is discouraged. Special permits allow the use of weaponry up to the level of military lasers and various heavy support weapons by groups with a specific need for such arsenals; permit holders include the various sea nomads and Seaharvester, as both groups require sophisticated weaponry to practice their trades. Permits are extremely hard to obtain.

Bellerophon possesses a Technology Level of TL–14 or TL-E in Hexadecimal Notation.

Despite being a water world, the planet supports a thriving population of over two billion people; most are concentrated in magnificent pylon cities which rise from the ocean shallows, thrusting two and sometimes three or more kilometers into the sky. Sea-bottom complexes and free-floating raft-cities are also present, and there is a considerable population — numbering in the tens of millions — of so-called "sea nomads" living aboard large ship-cities which follow herds of marine creatures that provide them with a livelihood.

Bellerophon's primary urban developments are present in the following forms:

Bellerophon was orignally established as a naval base of the Terran Confederation during the Interstellar Wars. Civilian settlers were brought in to help support the base, saving the navy the expense of shipping in food and raw materials. The majority of the settlers were "voluntary colonists" from the politically troubled Eastern Aegean region of Terra. A government subsidized colonization program brought several waves of immigrants of Greek and Turkish background to the world, where they spread to the scattered islands and began to establish themselves as fishermen; the first of the nomadic sea communities began around this date, ranging the oceans in the wake of Bellerophon's enormous marine grazers, the Daghadasi.

The fleets eventually moved on, and the base on Anteia was abandoned, but seawater metal-reclamation processors provided the economic basis for the first pylon cities and for prosperity.

Like most worlds, Bellerophon suffered somewhat during the Long Night, but its economic attachment to the Vegan Polity allowed the world to maintain advanced technology. During this period, many Vegan customs were adopted by the pylon cities; the Vegan idea of extreme cultural pluralism helped to insulate Bellerophon's societies from change, and its many cultures have remained remarkably stable through most of the world's history.

The rise of the Third Imperium and the period of Solomani rule made little difference except at the high levels of government. After the Solomani Rim War, Bellerophon's ties with the Vegan worlds made its inclusion into the Vegan Autonomous District natural. Again, only the planetary government changed: the Vegan civil service was substituted for the previous Solomani Party bureaucracy.

This list of sources was used by the Traveller Wiki Editorial Team and individual contributors to compose this article. Copyrighted material is used under license from Far Future Enterprises or by permission of the author. The page history lists all of the contributions.
Retrieved from "http://wiki.travellerrpg.com/index.php?title=Bellerophon_(SR_1519)_(world)&oldid=648683"
Categories: