Vendetta class fighters serve with the navy of the Korsumug Empire. They are carried aboard many larger classes of vessel. They are defined as a 'microfighter' because of their small size. 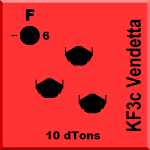 The Vendetta class is a fast, deadly combat vessel with 6-G performance and excellent agility. Its primary armament is missiles, though the design also mounts a forward-facing VRF Gauss Gun with a large hopper of ammunition. It has a generally polygonal shape and is an airframe design, allowing it to operate both in planetary atmospheres and the vacuum of space.

Vendetta class Fighters serve with the navy of the Korsumug Empire.

Vessel Peculiarities:
The vessel has no airlock. It is normal for the crew to wear vacc suits in case of emergency, despite the cockpit having full life support facilities.

Class Naming Practice/s:
Vessels of the Korsumug Empire are given alphanumeric designations and callsigns by other interstellar states. KF refers to 'Korsumug Fighter' (a designation applied to all Korsumug smallcraft combat units), 3 is a type indicator, and 'c' refers to the version of the vessel, relating to its construction tech level. Type codes will often repeat: 'Vendetta' is an easy to remember name to identify the specific type of vessel.

This list of sources was used by the Traveller Wiki Editorial Team and individual contributors to compose this article. Copyrighted material is used under license from Far Future Enterprises or by permission of the author. The page history lists all of the contributions.
Retrieved from "http://wiki.travellerrpg.com/index.php?title=KF3c_Vendetta_class_Fighter&oldid=664931"
Categories: