The Hornet class Medium Fighter is a combatant smallcraft.

The Hornet is a missile platform: it generally stands off at long range and sends in barrages of missiles. Squadron tactics and massed fire are used, when possible, to help compensate for the less powerful computer performance. When they are engaged close in, the Hornets agility and armored hull offer good protection. The cockpit contains an acceleration couch that is designed to be used in conjunction with a vacc suit: the cockpit is depressurized during during combat. The lack of crew accommodations curtails its operational endurance, generally limiting it to rapid strike sorties before returning to the carrier to rearm, refuel and recharge life support. They frequently operate alongside the related but lighter Aurora class Fighter. 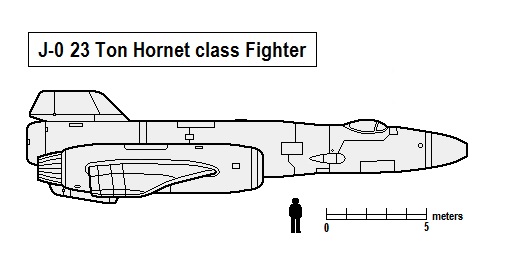 The Hornet class Medium Fighter serves with the Bain Defense Squadron, the space force of Bain, a Solomani world lying in Spica Sector. It operates alongside the Aurora, Constellation and Retaliator classes of Fighters. While these elegant and purposeful Fighters are considered somewhat hard to handle and do not support extended duration missions, their overall performance is very good and they are popular with their crews.

The Hornet mounts the locally designed and manufactured Misery Blue anti-shipping missile. The warhead is considered underpowered, the weapon system as a whole barely passed its proofing trials, and the design is prone to problems with its guidance systems. A number of examples of the Hornet class have been sold to neighboring worlds: they are generally refitted with standard Solomani weapons packages.

This list of sources was used by the Traveller Wiki Editorial Team and individual contributors to compose this article. Copyrighted material is used under license from Far Future Enterprises or by permission of the author. The page history lists all of the contributions.
Retrieved from "http://wiki.travellerrpg.com/index.php?title=Hornet_class_Medium_Fighter&oldid=577640"
Categories: