The Aurora class Light Patrol Fighter is a combatant smallcraft and a spaceplane.

The Aurora class Light Patrol Fighter was designed for service with the Bain Defense Squadron, the space force of Bain, a world lying in Spica Sector and a member of the Solomani Confederation. The Aurora is a reliable craft that is typically assigned to formations that carry out secondary duties such as routine patrols and customs inspections. The hull is built in a sleek, streamlined needle configuration and has good handling characteristics in atmospheres. It has excellent acceleration and agility. There is no bridge and the performance of the computer suffers as a result, but there is a small stateroom that affords more endurance and a better mission duration than the related Hornet class Fighter, which it regularly serves alongside.

It is considered to have an inferior weapons package. It has no subcraft and a minimal crew of one sophont. 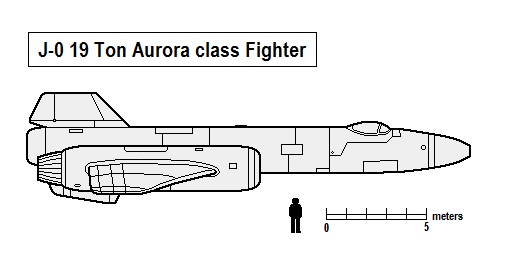 The Aurora class Light Patrol Fighter serves with the Bain Defense Squadron, the space force of Bain, a Solomani world lying in Spica Sector. They are occasionally called upon for Federation and Confederation service. It operates alongside the Hornet, Constellation and Retaliator classes of Fighters. Overall, the Aurora is considered to be a forgiving vessel and is generally where newly qualified pilots start their careers. Members of the class are carried aboard Bengal class Carriers.

The Aurora mounts the locally designed and manufactured Misery Blue class Anti-Shipping Missile. The warhead is considered underpowered, the weapon system as a whole barely passed its proofing trials, and the design is prone to problems with its guidance systems. A number of examples of the Aurora class have been sold to neighboring worlds: they are generally refitted with standard Solomani weapons packages.

This list of sources was used by the Traveller Wiki Editorial Team and individual contributors to compose this article. Copyrighted material is used under license from Far Future Enterprises or by permission of the author. The page history lists all of the contributions.
Retrieved from "http://wiki.travellerrpg.com/index.php?title=Aurora_class_Light_Patrol_Fighter&oldid=559895"
Categories: