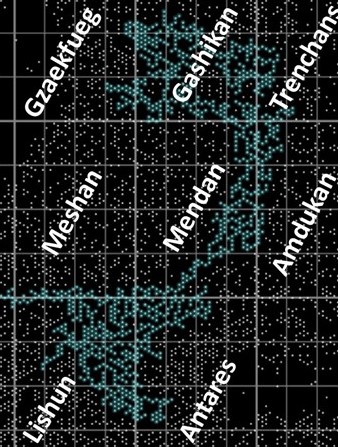 The Nudashiir Lagani is an astrographic feature located across a number of sectors.

A total of 1,037 systems, with 294 spread across three Imperial sectors, this main extends into the Domain of Antares and further coreward.

The Nudashiir Lagani, using the name given in the First Imperium (old Vilani Nudashiir = Domain Antares; Lagani = jump-1 main), a total of 1,037 systems, with 294 spread across three Imperial sectors, this main extends into the Antares Domain and further coreward. is a main that touches ten sectors in Charted Space.

In Amdukan, the main runs along the spinward edge of the sector, and includes Asimikigir (Amdu 0223) located in Julian (Amdu I) ‐ capital of the influential Asimikigir Confederation, and capital of the Julian Protectorate.

In Antares, this main runs along the spinward and coreward edges of the sector in all but Beta Quadrant and includes the Imperial subsector capital at Taku (Anta 0627).

In Gashikan, the main covers all of Gamma and Delta Quadrant as well as large portions of the rimward subsectors of the Alpha and Beta Quadrant. It also hosts Gashikan (Gash 2732) ‐ the capital of the Third Gashikan Empire.

In Lishun, this main encompasses all but two systems in Beta Quadrant, with a presence in Alpha and Delta Quadrant. The main hosts the sector capital at Tephany (Lish 2719) and subsector capitals at Adawi (Lish 1408), Anossed (Lish 1815), Fokulgvu (Lish 2207), and Iisgamdi (Lish 2908).

In Mendan, the main runs along the trailing edge of the sector and diagonally to the rim‐spinward corner of Delta Quadrant. The main also hosts the capital of the Commonwealth of Mendan, Mendan (Mend 2909); the capital of the Pirbarish Starlane, Lasla (Mend 1634); and the capital for the Asimikigir Confederation at Airus (Mend 2922).

In Meshan, the main runs along the entire Rimward border of the sector, and hosts systems of the Antares Pact, the First Fleet of Dzo, and the Voekhaeb Society.

In Trenchans, the main runs against the spinward and trailing edges of Gamma Quadrant and hosts forty‐four systems of the Third Gashikan Empire.

In Vland, the main has only two systems at the core‐trailing corner of Beta Quadrant.

In Windhorn, the main is in the rim‐spinward corner of the Kishadiku (Wind P), with a minor presence at the rimward edge of the other two subsectors.

This list of sources was used by the Traveller Wiki Editorial Team and individual contributors to compose this article. Copyrighted material is used under license from Far Future Enterprises or by permission of the author. The page history lists all of the contributions.
Retrieved from "http://wiki.travellerrpg.com/index.php?title=Nudashiir_Lagani&oldid=631107"
Categories: