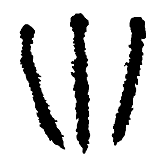 The Kindred of Claws Flotilla serves the Korsumug Empire.

The Kindred of Claws Flotilla is a large naval unit of the Korsumug Empire. 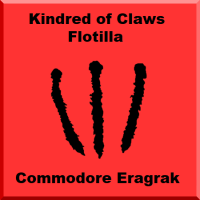 The standard of the Kindred of Claws Flotilla.

The Flotilla has seized control of the Class A Starport and the naval base at Jend. The Flotilla has transferred its headquarters to the system and is using it as a jumping off point for raids against independent worlds within the region. The starport provides maintenance and repair facilities to the vessels of the Flotilla.

A number of different squadrons make up the Flotilla. Rivalry is endemic within them and conflict is rife.

Hoddin is the headquarters for the fleet. As well as the main administrative complexes the HQ includes a large hospital, a military prison, research and development laboratories, and a number of private spaceport facilities. The structures are hardened against attack, are heavily guarded, and are protected by a large number of Planetary Defense sites.

Hoddin Naval Base
Hoddin is primarily a logistical facility, holding large quantities of supplies, spares, and equipment. Its facilities are hardened against attack and are heavily defended.

Felspar is the site of major naval construction yards that turn out large numbers of vessels per year. The site has a particularly high number of Jansa personnel and is the base for a number of capital ships, including at least one Scourge class battleship.

The Kindred of Claws Flotilla was formed in the 980s from various Korsumug forces located around Far Gand, an important naval base located in Shimmerskip Subsector of Mavuzog Sector. It was created with the intent of conquering Vardin Space, a then-independent region dominated by the Vardin lying in the spinward half of Mavuzog Sector.

Around 1000 the Fleet struck into Siridor Subsector and drove coreward towards Felspar, lying just across the border in Galaxa Subsector, finally conquering the system after a protracted attritional battle that resulted in a great deal of destruction and huge numbers of casualties. Within the next few years Vardi, the Vardin homeworld, had also been taken, and not long afterwards the rest of Vardin Space fell. Resistance to the occupation was continuous and fanatical and the Jaibok have found themselves embroiled in a generations-long insurgency determined to secure local autonomy.

Resistance to Jaibok occupation within Siridor Subsector is continuous, with armed uprisings against Korsumug control receiving covert support, principally from the Sorority of Hygiea. The Fleet, acting on behalf of the Empire, defends against the insurgencies, keeps the peace, guarantees interstellar trade, and inflicts harsh reprisals against wrong-doers.

Fleet Admiral Karrak, the commander of the Fleet, is the Korsumug military governor.

A diagram depicting the region of Oscuro Subsector under Kindred of Claws Flotilla control, as well as ongoing fleet operations. 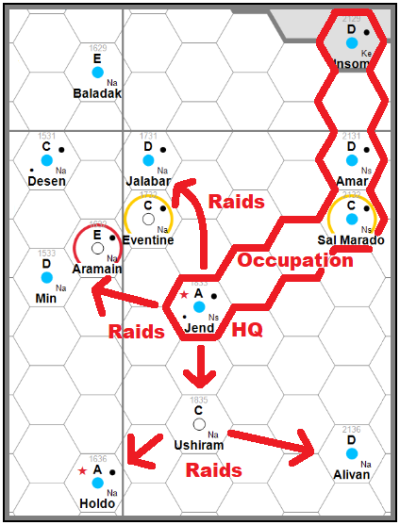 No world articles for Kindred of Claws Flotilla

This list of sources was used by the Traveller Wiki Editorial Team and individual contributors to compose this article. Copyrighted material is used under license from Far Future Enterprises or by permission of the author. The page history lists all of the contributions.
Retrieved from "http://wiki.travellerrpg.com/index.php?title=Kindred_of_Claws_Flotilla&oldid=667445"
Categories: