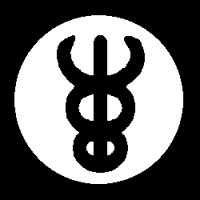 The Sorority of Hygiea is a small polity or Pocket Empire.

The Sorority of Hygiea is a matriarchal state, with all interstellar leadership roles filled by women. The ruling class is composed entirely of elite female warriors sharing an extended familial lineage. The last male members of the line passed away centuries ago, and the family have used genetic engineering and cloning banks ever since to maintain their numbers. 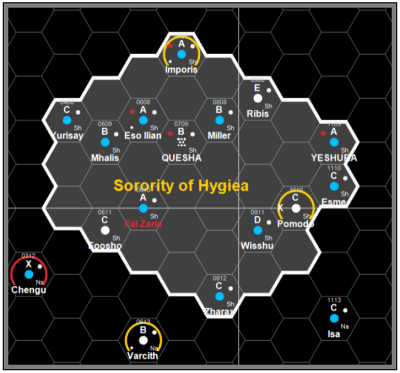 The Sorority is controlled by the Sisters, a martial Self-perpetuating Oligarchy who rule a generally supportive population. 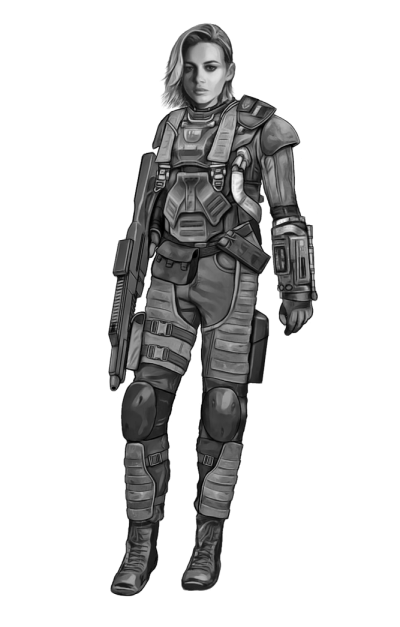 Sisters of the Sorority have a reputation for abruptness and pragmatism. They are warriors, trained from infancy in a broad range of martial skills and observe a traditional code that emphasises the duality of the mind and the physical body. A strong will is needed to break a rock, as much as is a strong arm.

Individual Sisters do not have surnames, since they all share the same genetic pool. Instead they earn themselves a "name of virtue" through achievement and though battle.

Each Sister forges her own sword. They are taught the craft as part of their upbringing and education. It is a mark of their skill and ability and the nature of the blade is a reflection of their personality. A Sister who cannot create a decent weapon upon reaching 18 years of age is not considered suitable for a leadership role.

The Sorority rule their domain from vast private estates located on each member world. These estates all have a central fortress called a Hall, as well as outlying facilities including one or more private spaceports. Each Hall is built in an isolated area, in a defensible position, far from the local population.

The heart of each Hall is the Keep, a walled compound divided into a great forge where swords can be made and a tended garden centered on a sacred grove. These are closely guarded at all times.

The Hygiean Fleet defends the state and is divided between four Naval Bases.

Many Droyne that inhabited worlds now occupied by the Korsumug Empire fled to the Sorority. They have formed a commensal society with the Sisters, forming enclaves within the Sorority's private estates and remaining distant from the local populations.

This polity is located in the following areas:

The capital of this polity is located at:

This list of sources was used by the Traveller Wiki Editorial Team and individual contributors to compose this article. Copyrighted material is used under license from Far Future Enterprises or by permission of the author. The page history lists all of the contributions.
Retrieved from "http://wiki.travellerrpg.com/index.php?title=Sorority_of_Hygiea&oldid=674125"
Categories: