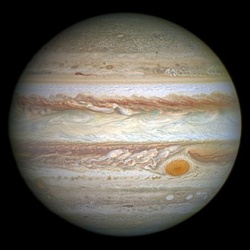 Jupiter is a barren fluid hellworld with oceans of a liquid other than water such as ammonia, methane, or hydrocarbons, or other exotic liquids.

Jupiter is a large gas giant lying in the outer part of the Terra system, in Sol Subsector of the Solomani Rim.

Jupiter has a UWP classification of "LGG" and is categorised as a large gas giant. It orbits Sol at a mean distance of 5.2 AU (778.5 million km) and has an orbital period of 11 years 315 days. It has a mean rotation period (a local day) of 9.9 standard hours, although the surface is not rigid and different regions of (and altitudes within) the world rotate at different rates. Jupiter has a diameter of 139,822 km, a mean density of 1.33 g/cm³, and a surface gravity of 2.53 G.

The core of the world has a diameter of approximately 32,000 km and is primarily composed of heavy elements such as nickel (Ni) and iron (Fe), and substantial concentrations of silicates (SiO 4–). It also contains large quantities of superionic hydrogen (H2) and helium (He), as well as trace amounts of radioactives such as thorium (Th) and uranium (U). The core temperatures exceed 20,000°C and pressures exceed 40 megabars. The world is still contracting as part of its formation process: as it contracts the gravitational energy of material falling towards the center generates huge amounts of heat, the primary source of the high internal temperatures. The core is dynamic and active.

Above the core regions is a dense mantle with a diameter of approximately 135,000 km. It is composed of around 75% hydrogen (H2), more than 24% helium (He), and less than 1% methane (CH4), ammonia (NH3) and other trace substances including oxygen (O2) and sulfur (S). The hydrogen and helium within the lower third of the mantle is in a liquid metallic phase and is electrically conductive. At higher levels the hydrogen and helium transition into liquid phases until the point where the pressure falls to around two megabars, where they begin to transition into atomic gases and form the deep atmosphere. Temperatures within the mantle decrease with altitude, dropping to as low as -160°C within the outer transition layers.

Above the mantle is the deep atmosphere, composed of 90% atomic hydrogen (H2), 10% helium (He), and trace quantities of methane (CH4), carbon monoxide (CO), ammonia (NH3), neon (Ne), ozone (O3), phosphine (PH3), sulfur (S), hydrogen peroxide (H2O2), ammonia hydrosulfide (H5NS) and various other gases and compounds. The deep atmosphere has an approximate depth of 2500 km and experiences pressures that range from 2 megabars at the deepest levels (where the gases begin to transition into a liquid phase) to around 1 bar of pressure at its upper levels (the region considered to be the surface of the world). Temperatures range from -160°C at the transition zone to around -100°C at the surface. It is murky and dark, with visual ranges measured in meters at best.

The surface regions have a mean atmospheric pressure of 1 bar and a composition of 90% atomic hydrogen (H2), 10% helium (He), and trace amounts of methane (CH4), carbon monoxide (CO), ammonia (NH3), and other trace gases similar to those found within the deep atmosphere.

The troposphere extends from the surface regions to an altitude of approximately 50 km, where the mean atmospheric pressure equals approximately 0.1 bar. Temperatures are around -100°C within the surface regions and fall to as low as -160°C within its upper levels. Wind speeds within the troposphere regularly exceed 250 kph and there is a great deal of turbulence. Above the clouds the gas mixture is transparent. Below the clouds the atmosphere is dark and opaque, with visibility rarely exceeding a few kilometers.

The stratosphere extends from around 50 km to around 320 km above the surface and is characterised by elevated levels of methane (CH4). Pressures range from 0.1 bar at its lower levels to 0.01 bar within the upper regions. Temperatures within the lower stratosphere are typically around -160°C and climb to around -100°C within its upper levels. Wind speeds within the stratosphere regularly exceed 300 kph. The gas mixture is transparent.

The thermosphere lies above the stratosphere. It extends to an approximate altitude of 1,000 km and has mean atmospheric pressures of less than 0.01 bar. Temperatures within it rise from approximately -100°C to around 725°C. Temperature differentials cause powerful winds, with average wind speeds exceeding 300 kph. The gas mixture is transparent.

The outermost layer of Jupiter's atmosphere is the exosphere. It is considered to start at an altitude of approximately 1,000 km, where the mean atmospheric pressure is less than 0.001 bar. It has no clear upper boundary but is generally considered to exceed 1,000 km in depth. Temperatures within the exosphere fall rapidly with altitude until they match the temperature of the local interstellar medium. Wind speeds vary from relatively stationary to hundreds of kilometers per hour. The gas mixture is transparent.

Jupiter experiences violent but predictable weather patterns which generally take the form of zonal jets, similar to sub-tropical jet streams on Terra. In these weather fronts wind speeds of 360 kph are common. Storms can form within hours and expand to become thousands of kilometers in diameter.

Jupiter boasts a prominent feature known as the Great Red Spot. The feature was first identified from the surface of Terra circa -2800 Imperial following the development of sophisticated optical imaging devices (telescopes) on that world. The Spot is a persistent high-pressure region producing a violent anticyclonic storm and has dimensions that vary between 24–40,000 km × 12–14,000 km over a period of decades. It is located 22° south of the planet's equator and takes about six standard days to completely rotate. Its composition is broadly similar to that of the gases surrounding it. The spot is colder than the surrounding gases and has a higher mean altitude, with its internal cloud tops some 8 km taller than those of the bands. Currents within the Spot are stagnant, with little inflow or outflow, though winds passing around its edges are at around 430 kilometers per hour. The atmosphere directly above the Great Red Spot is significantly warmer than surrounding regions.

The rings are composed of small dark particles and were formed by dust and debris kicked up by interplanetary meteoroids impacting the small inner moons that orbit among them. They are difficult to see with the naked eye except when backlit by the Sun but are clearly visible to broad spectrum sensors.

Jupiter has a strong magnetic field. Its strength ranges between 0.42 mT at the equator to as much as 1.4 mT at the poles. It balloons to up to 3 million kilometers toward the Sun and tapers into a long tail extending more than 1 billion kilometers behind the world. It creates a cavity in the solar wind that all of the world's major moons orbit within. Beyond the magnetosphere is the magnetopause, where the planet’s magnetic field becomes weak and the solar wind interacts with matter originating from the planet.

No lifeforms are known to exist within Jupiter.

Io (UWP Y210000-0) is the inner of the four major moons of Jupiter and is classified as a worldlet. It orbits its parent world at a mean distance of 3 diameters (422,000 km), with an orbital period of 42 hours: it is tidally locked to Jupiter and in Laplace resonance with Europa and Ganymede. Io has a diameter of 1,822 km, a density of 3.50 g/cm³ and a surface gravity of 0.183 G. Tidal stresses generated by the gravitational pull of Jupiter cause extreme geological activity and the surface is dotted with active volcanoes. The atmosphere is rated as Trace, with a mean surface pressures of less than 0.0001 bar and a typical composition of 90% sulfur dioxide (SO2), and 10% sulfur monoxide (SO), sodium chloride (NaCl), atomic sulfur (S) and oxygen (O2) – the exact composition is dependent on geographical location. The world has no hydrosphere. Mean surface temperature: -130°C. Temperatures around volcanic vents and can exceed 1,650°C.

Europa (UWP H200000-0) is the second of the four major moons of Jupiter and is classified as a worldlet. It orbits its parent world at a mean distance of 5 diameters (671,000 km), with an orbital period of 85 hours: it is tidally locked to Jupiter and in Laplace resonance with Io and Ganymede. Europa has a diameter of 3,122 km, a density of 3.01 g/cm³and a surface gravity of 0.134 G. Tidal stresses generated by the gravitational pull of Jupiter cause interal heating of the world. The atmosphere is rated as vacuum. The world has no surface hydrosphere. Mean surface temperature: -160°C. Its surface is extremely smooth and is striated by cracks and streaks.

Ganymede (UWP F300468-F M) is the third of the four major moons of Jupiter and is classified as a worldlet. It orbits its parent world at a mean distance of 8 diameters (1.07 million km), with an orbital period of 7 days 3 hours: it is tidally locked to Jupiter and in Laplace resonance with Io and Europa. Ganymede has a diameter of 5,268 km, a density of 1.94 g/cm³ and a surface gravity of 0.146 G. Tidal stresses generated by the gravitational pull of Jupiter cause occasional geological activity. The atmosphere is rated as Vacuum. The world has no hydrosphere. Mean surface temperature: -113°C in daylight, -183°C at night.

The Kensington Armed Forces Testing Center, a naval research laboratory.
The Zeus Institute is a branch of the University of Terra studying gas giants and their dynamics.

Callisto (UWP Y30016A-F R) is the outer of the four major moons of Jupiter and is classified as a worldlet. It orbits its parent world at a mean distance of 13 diameters (1.883 million km), with an orbital period of 16 days 15 hours: it is tidally locked to Jupiter. Callisto has a diameter of 2,410 km, a density of 1.83 g/cm³ and a surface gravity of 0.126 G. Tidal stresses generated by the gravitational pull of Jupiter cause occasional geological activity. The atmosphere is rated as Vacuum. The world has no hydrosphere. Mean surface temperature: -139°C.

In addition to the four major moons, Jupiter retains a family of 65 lesser worlds. These are (in order outward from Jupiter):

During the early stages of the Solomani Rim War, fierce battles were fought in Jupiter's upper atmosphere and dark rings between Imperial ships and Solomani Confederation system defense boats.

Jupiter has a Class F Spaceport, a good quality secondary installation for handing expected in-system traffic. It can supply amenities like brokerage services for passengers and cargo and refined fuel. There is a shipyard capable of doing annual maintenance, overhauls and most kinds of repair, and construction of non-starships. Spaceports usually consist of a Downport.

Jupiter possesses a Technology Level of TL–12 or TL-C in Hexadecimal Notation.

This list of sources was used by the Traveller Wiki Editorial Team and individual contributors to compose this article. Copyrighted material is used under license from Far Future Enterprises or by permission of the author. The page history lists all of the contributions.
Retrieved from "http://wiki.travellerrpg.com/index.php?title=Jupiter_(world)&oldid=639217"
Categories: