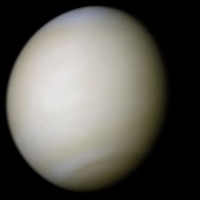 Venus (SR 1827) is a low-population hellworld with a population less than 10,000 sophonts struggling to survive in an inhospitable environment .

Venus is an insidious atmosphere inferno world lying in the H– region of the Terra system, in Sol Subsector of the Solomani Rim.

Venus is categorised as an inferno world. It orbits Sol at a mean distance of 0.72 AU (108 million km), within the H– region of the inner system. It has an orbital period of 224 days 16 hours, and a clockwise (retrograde) rotational period of 243 days, which when combined produce a local "day" of 116 days 18 hours from the perspective of one standing on the surface. The axial tilt is 177.4 degrees. Venus has a diameter of 12,104 km, a density of 5.24 g/cm³, and a surface gravity of 0.9 G. It is geologically active. Its atmosphere is rated as Corrosive, with a mean surface pressure of 92.1 bar and a composition of 96.5% carbon dioxide (CO2), 3.5% nitrogen (N2), and trace amounts of sulfur dioxide (SO2), argon (Ar), water vapor (H2O), carbon monoxide (CO), helium (He) and neon (Ne). The world has no hydrosphere. Mean surface temperature: 467°C. The atmosphere is active and strong weather systems driven by convection flow within its upper levels. The climate is static.

Venus has an extremely hot metallic iron core with a diameter of approximately 6,000 km. Above this is a hot mantle roughly 3,000 km thick that exhibits fluidic properties. The crust is largely composed of basaltic rock with an average thickness of between 10 and 20 km. The world does not generate a significant magnetic field.

The troposphere is the lowest layer of the atmosphere and experiences pressures ranging from 92.1 bar at the surface to 1 bar at an altitude of 50km. Below 10 km the air is gloomy and murky, with red-tinted hazes composed of fine dust and mists of evaporated surface sulfur (S). At altitudes of between 10 and 30 km the atmosphere is relatively transparent, though it contains significant quantities of sulfuric acid particles (H2SO4). At altitudes of between 30 and 50 km the air is filled with a dense haze composed of airborne dust and very fine droplets of sulfuric acid, the result of evaporating sulfuric acid rain falling from the stratospheric cloud decks.

Above the troposphere is the stratosphere, with pressures ranging from 1 bar at an altitude of 50 km to around 0.05 bar at an altitude of 80 km. Within its lower levels it is dominated by thick cloud layers composed of sulfuric acid droplets. The highest cloud tops reach altitudes of almost 60 km. At higher levels the stratosphere contains airborne particles of sulfur, which serve to give the otherwise transparent gas mixture a distinct yellowish hue.

Above the stratosphere is the mesosphere. Its lowest regions, beginning at an altitude of around 80 km, have a pressure of around 0.05 bar. The mesosphere extends to beyond 1,000 km and at its outer edge, where pressures are near vacuum, atmospheric gases bleed into interstellar space. Wispy clouds made up of tiny ice crystals can be found very at high-levels.

Temperatures on the surface average a scorching 467°C. They fall with altitude, averaging around 20°C within the tropopause, the troposphere's upper zone. They continue to fall to as low as -150°C within the upper stratosphere. Temperatures increase within the mesosphere (rising to as high as -100°C as a result of stellar energy acting on the world) then fall again to match that of the local interstellar medium.

Total surface area: 460 million km². Roughly two-thirds of the world's surface is covered by relatively flat, smooth plains (known as planitiae) strewn with rubble and boulders and dotted by thousands of volcanic caldera ranging from 1 to 240 kilometers in diameter. Some are active, and lava flows emerge from them and carve long, winding channels which can exceed 5,000 km in length. Six major mountainous regions make up the remaining third of the surface. Mount Maxwell, lying within the Maxwell Range, has a height of 11.3 km, making it the highest feature on the world.

Venus does not have native life.

Venus is the second planet from the sun in the Terran system in Sol Subsector of the Solomani Rim.

Venus (SR 1827) has a Class G Spaceport, poor quality secondary installation for handing expected in-system traffic. It can supply a only a few amenities. There is unrefined fuel available for purchase. There is no shipyard of any kind, but there may be parts and technical support for doing minor services and repair. Ports of this classification generally consist of only a downport.

Venus (SR 1827) possesses a Technology Level of TL–14 or TL-E in Hexadecimal Notation.

This list of sources was used by the Traveller Wiki Editorial Team and individual contributors to compose this article. Copyrighted material is used under license from Far Future Enterprises or by permission of the author. The page history lists all of the contributions.
Retrieved from "http://wiki.travellerrpg.com/index.php?title=Venus_(SR_1827)_(world)&oldid=639214"
Categories: