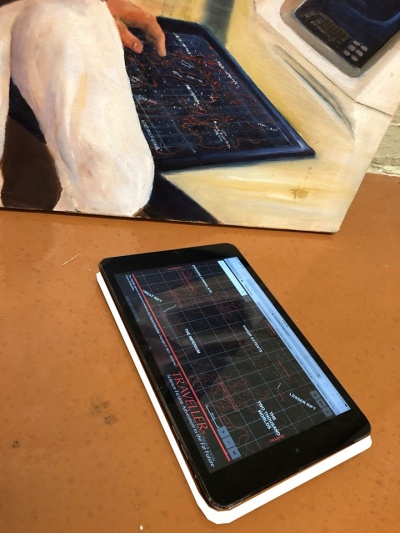 Marc Miller: This is a detail from the (1986) Traveller Aliens piece by Bill Keith. That's my handcomp in front, with TravellerMap by Joshua Bell loaded. I think Bill Keith did a pretty good job predicting the future there.

Traveller Map is a premier support site for the Traveller RPG. The site is run by Joshua Bell and many fans, who support him.

Joshua Bell: This site was inspired by many sources, most prominently some of the treasured possessions from my childhood: the Imperium Map poster which provided an overview of Charted Space in the Classic Traveller era; the Spinward Marches poster included with Deluxe Traveller; and the Atlas of the Imperium, which provided cursory maps of all sectors of the Third Imperium. In the early 1980's, using these and the classic Alien Modules, I carefully pieced together a map of known space on paper. I also dutifully entered the Sector Generator BASIC program into my Apple II and spent endless hours trying to coax a decent map from a dot-matrix printer.

In early 2005, after a hiatus from Traveller of nearly 20 years, I purchased a copy of the GURPS Traveller rulebook, which includes a map of charted space within the frame of an imaginary computer-based map viewer. I first saw this within weeks of Google Maps appearing, and was inspired to create a functional version of the map viewer using contemporary Web technologies. I was also inspired by the many other online Traveller map resources and desktop applications such as Jim Vassilakos' venerable Galactic.

Starting in 2013, this site began hosting the official data files of the Traveller 5 Second Survey effort, as well as older published data and unofficial fan submissions.

This list of sources was used by the Traveller Wiki Editorial Team and individual contributors to compose this article. Copyrighted material is used under license from Far Future Enterprises or by permission of the author. The page history lists all of the contributions.
Retrieved from "http://wiki.travellerrpg.com/index.php?title=Traveller_Map&oldid=660652"
Categories: