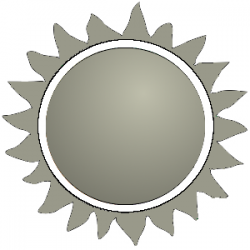 The Sector File Format is a description of the layout of the data describing the worlds in a sector. The layout of the different fields of data are intended for both computer to be able to parse the data for further analysis and to allow humans to read the data.

The number and organization of the sector files has varied over time. With each edition of Traveller, new fields have been added or expanded.

The formats used for the Traveller publications are more designed for being readable by human beings and the limitations of the print medium.

This format is used by several Classic Traveller books including The Spinward Marches and The Solomani Rim supplements. This format does not use abbreviations for the trade classifications and other comments for each worlds.

By the publication of Vargr the sector file format has moved to include the stellar data generated via the Scouts and the abbreviated trade codes as described in Merchant Prince.However the format omit the name of the world. The world name would be included in a separate list. This allowed the sector data to fit into the two column format used by the books.

The Players' Manual uses the same format as the later Classic Traveller layout.

Books in the New Era publications used a two line format, one for the data from the Classic Traveller (milieu 1116), the other for data for the New Era (Milieu 1200). The fields are Name, Hex Location, UWP, Base Code, Trade Codes, Travel Zone, PBG, Allegiance Code, Stellar Data.

This list of sources was used by the Traveller Wiki Editorial Team and individual contributors to compose this article. Copyrighted material is used under license from Far Future Enterprises or by permission of the author. The page history lists all of the contributions.
Retrieved from "http://wiki.travellerrpg.com/index.php?title=Sector_File_Format&oldid=628360"
Categories: