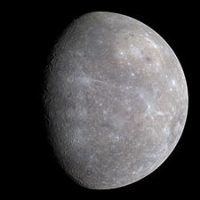 Mercury (SR 1827) is a hellworld, with a vacuum environment in which a population is struggling to survive against an inhospitable environment.

Mercury has the most extreme temperature ranges in the Terra system, ranging from 449°C during the day to -170°C at night.

Mercury is categorised an inner world. It orbits Sol at a mean distance of 0.39 AU (57.9 million km), within the inner system. It has an orbital period of 87 days 12 hours and a rotation period of 58 days 6 hours. The axial tilt is 0 degrees. Mercury has a diameter of 4,879 km, a density of 5.42 g/cm³, and a surface gravity of 0.38 G. The world is largely geologically inert. Its atmosphere is rated as Vacuum: trace amounts of atomic hydrogen and helium have been detected lying within deep surface features. It has no hydrosphere. Surface temperatures range from a maximum of 449°C in direct sunlight to a minimum of -170°C in darkness.

Mercury has an extremely hot iron-rich liquid metal core with a diameter of approximately 3,600 km. Above it is a hot mantle composed of silicates with a depth of approximately 600 km. The crust is formed of basaltic and anorthositic rocks and has a depth of between 50–100 km. The world has a weak electromagnetic field.

Total surface area: 74.8 million km². The surface of Mercury has numerous plains, ridges and low hills, including the Caloris Planitia (the largest feature on the surface, actually a gigantic crater), the Sobkou Planitia and the Borealis Planitia, the Calypso Rupes and the Paramour Rupes. Some regions exhibit heavily cratering while others are relatively crater free. The largest craters include Rembrandt, with a diameter of 715 km, and the Chao Meng-Fu crater on the south pole. Much of the surface is covered in a layer of regolith, rubble and dust. The surface is primarily shades of dark gray, with lighter patches generally indicating younger features.

Mercury does not have native life.

Mercury (SR 1827) is the innermost planet in the Terran system in Sol Subsector of the Solomani Rim.

Mercury (SR 1827) has a Class G Spaceport, poor quality secondary installation for handing expected in-system traffic. It can supply a only a few amenities. There is unrefined fuel available for purchase. There is no shipyard of any kind, but there may be parts and technical support for doing minor services and repair. Ports of this classification generally consist of only a downport.

Mercury (SR 1827) possesses a Technology Level of TL–14 or TL-E in Hexadecimal Notation.

The main settlement is built into the Chao Meng-Fu crater on the south pole.

This list of sources was used by the Traveller Wiki Editorial Team and individual contributors to compose this article. Copyrighted material is used under license from Far Future Enterprises or by permission of the author. The page history lists all of the contributions.
Retrieved from "http://wiki.travellerrpg.com/index.php?title=Mercury_(SR_1827)_(world)&oldid=688433"
Categories: