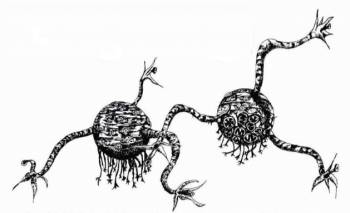 A Jovionoid is the typoid classification of creatures with Gas Giants as their native world. Jovionoids are considered unconventional life.

The term Jovian derives from the Terran system planet Jupiter (world), the largest gas giant in the system. The world of Jupiter has no life forms.

In practice, Jovionoids are flyers or floaters and breathe hydrogen or hydrogen compounds with alternate biochemistries. Jovionoid civilizations are sometimes called "Hydrogen Societies."

It is known that conventional lifeforms to develop very similar biologies, physiologies, and appearances to jovionoids and develop on terrestrial worlds. These are usually cases of parallel evolution.

Jovionoid Lifeforms are still considered rare within Charted Space. There are numerous reports that jovionoids is much more common outside of Charted Space. The relative rarity of Jovian creatures within Charted space is usually assigned to relatively rare requirements to interact. It is thought that a comprehensive program to search for Hydrogen-breathing Jovionoid life would turn up many other such species, and that while many of them would be primitive pre-spacefaring civilizations

Charted Space knows only a handful of Jovionoid species:

Jovionoids tend to be prolific species and experience much less competition for worlds than conventional, terrestrial life.

The following systems, worlds, and gas giants are known places of residence for jovionoid

This list of sources was used by the Traveller Wiki Editorial Team and individual contributors to compose this article. Copyrighted material is used under license from Far Future Enterprises or by permission of the author. The page history lists all of the contributions.
Retrieved from "http://wiki.travellerrpg.com/index.php?title=Jovionoid&oldid=627404"
Categories: