First contacted in -209 in Reshumirak (Dagudashaag 1025) system. Since then Domination colonies have been found in the upper atmospheres of twelve gas giants located throughout Dagudashaag, Gushemege, and Core sectors.

The majority resemble 1m long sting rays with a number of tendrils located along the underbelly. 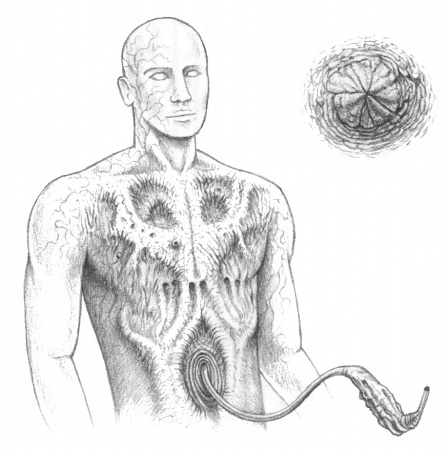 As a jovoioid race their environmental preferences are for the atmosphere of a gas giant. They are not capable of surviving in the oxygen-nitrogen atmosphere, nor the temperature or pressure ranges of most races.

As a carnivore, the subsist on a diet of other creatures, though they are only capable of consuming other species from their own home world.

Initial contact between Humaniti and the Domination occurred in -209, when a warship from the Medurma Pact entered the Reshumirak system looking for pirates and observed a Domination ship descending into the gas giant atmosphere.

A permanent research base was soon established on Reshumirak, with researchers from Medurma and the Ushran Empire using robotic probes to explore the gas giant and observe the Domination colony deep in the atmosphere.

In -101, a Domination ship malfunctioned, and was left drifting for several days in the outer system. The research teams finally made real contact when the decision was made to initiate first contact. During the mission it was discovered the Domination ship was using an old Vilani fusion power plant and jump drive apparently scavenged from an old, long abandoned, Vilani mining colony on Reshumirak.

Entry Into the Interstellar Community[edit]

The initial contact went well and trade relationships were established. A permanent orbital station was placed in orbit around the Domination gas giant, allowing for continued communications.

The first Human Rider was Professor Jose Delphi, volunteering in 322. With others following every few years.

In 876 the local Domination colony on Beleperan (Dagudashaag 1626) decided to help themselves to a shipment of Ambalite, destroying the transport in the process. The Remnants Subsector navy, led by Admiral Karl Ghenas III, Earl of Shankida, elected to take the matter into his own hands.

He ordered his Battle Cruisers' entire arsenal of nuclear weapons fired at the colony deep in the gas giant atmosphere. The entire Domination fleet was destroyed a few minutes later by the resulting shock wave.

Dominator starships are formed from genetically altered floaters, interfaced with multiple servitor seeds. The Domination starships of Reshumirak were selectively bred into this task using servitor seeds. The living starship creature can not survive vacuum and die during their maiden launch. The seeds allow the Domination crew to control the dead matter of the creature's corpse, preventing further decay and providing essential starship systems. The Domination have been unable to manufacture genetic fusion generators or jump drives, which are purchased from other races and merged into the ship body.

Although now dead and animated matter, the ship's organic nature allows the alteration and creation of additional holds or life support system as needed.

This race (sophont species) is primarily located in the following areas:
Charted Space:

This list of sources was used by the Traveller Wiki Editorial Team and individual contributors to compose this article. Copyrighted material is used under license from Far Future Enterprises or by permission of the author. The page history lists all of the contributions.
Retrieved from "http://wiki.travellerrpg.com/index.php?title=Domination&oldid=600478"
Categories: