The Esther class Armored Fighter is a combatant smallcraft.

The Armored Fighter is a cheap, reliable vessel designed to have improved survivability. Similar designs have been in use from the time the Distant Fringe was first settled. It is defined as a microfighter due to its small size. 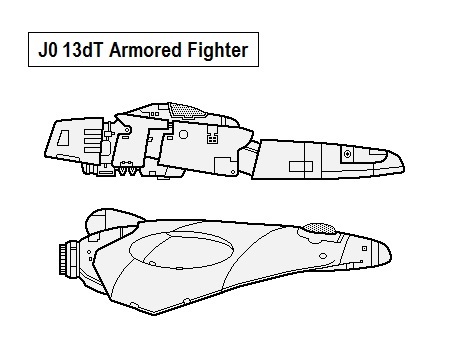 An ubiquitous design used throughout the Distant Fringe, the Armored Fighter is hardy, durable and reliable. The design is representative and a large number of variants exist, particularly with regard to the allotted weapons systems and onboard electronics. Despite their status as space fighters, designs of this type have airframe features, augmenting their handling characteristics within planetary atmospheres.

All of that aside, they are worth their weight in gold in their best role, the savior of the marine, close air support. Modern ground units can not expect to survive for long on the ground without tightly integrated close fighter support. VRF Gauss Gun strafing runs and precision weapon deployment against hard ground targets allow grav mobile assault units to strike fast and hard. The ability to take out enemy grav tanks, provide point defense and best of all survive ground fire. These thickly armored hulls render them all but immune from most army and marine mobile weapon systems, only enemy fighter squadrons offer any real deterrent to their operations. They tend to strike with impunity and then slink off to reload and return, a welcome sight to any ground pounder, provided his frequency agile EMS IFF is squawking loud and proud.

This list of sources was used by the Traveller Wiki Editorial Team and individual contributors to compose this article. Copyrighted material is used under license from Far Future Enterprises or by permission of the author. The page history lists all of the contributions.
Retrieved from "http://wiki.travellerrpg.com/index.php?title=Esther_class_Armored_Fighter&oldid=514137"
Categories: